Our showers are quite impressive, communal but they do the trick and there’s no queue this morning. Equally good is the breakfast butty.

Then we head down into the festival to walk it off. Someone has told L there’s so much walking involved here that she lost 2lb. I can believe that, Glastonbury is like a small town and the site organization is amazing everywhere, not just in Worthy View. It is also already apparent that Glastonbury offers so much than any other festival that I’ve been to. 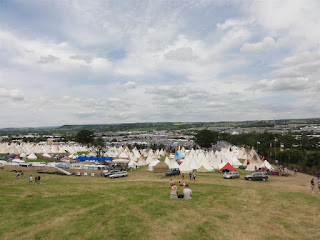 There are attractions galore, although not everything is open yet. I can’t help feeling that if they got everything finished by Wednesday and put a few more acts on the small stages it would be a good move because everything that was happening on Wednesday and Thursday was so heavily oversubscribed.

Mobile phone coverage is also impressive. EE are on site providing a 4G signal and also a powerbar swapping point. The powerbar is a handy portable recharging gadget for your phone and I have obtained a couple in advance. You can then swap them for freshly charged ones every day if you have the correct wristband. Which we do. So many wristbands, we are so cool. 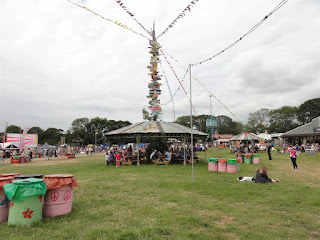 Being cool also involves getting the t-shirt selection right and it’s always a tough decision on what t-shirts to take to events like this. I started in a retro 1980’s Global Hypercolour T-shirt, these used to change colour with body heat. No one seems to notice but then I don’t think mine has worked properly since about 1985.

My choice of a 1990 vintage Ride t-shirt goes down much better. Everyone asks me if I know if the recently reformed band will be playing a secret set and if so where will it be. Well there are three lots of ‘special guests’ on the line-up on Friday and the rumours of a Ride appearance seem to have steadily intensified since we arrived yesterday. Though I can’t help feeling I inadvertently started them in the first place. Still, if Ride are going to be playing a sneaky set here obviously we’re going to have to find it. 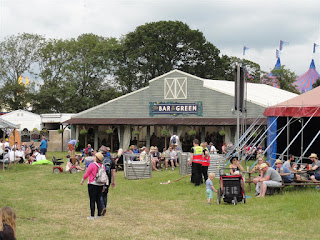 Meanwhile, the Cockmill Bar in the Acoustic Field quickly becomes a favourite as they have a good selection of local real ales. Everything is £4:50 a pint including the wine, only that doesn’t come as a pint. Being in Somerset we also have to try the cider, although there aren’t many under 6% ABV.

It’s also next to the cinema where we go see the cult 1980’s film ‘The Goonies’. This film has passed me by up to this point and I’d rather it had stayed that way. Not my thing at all even as a child.

Tonight’s eclectic meal takes us to India, ok so hardly unusual but we have a very nice Veggie Indian as we continue dining around the world.

Late at night everyone seems to head off to what they call the South-East corner and places with names like the Unfairground, Block 9, Heaven and Hell or Arcadia. These places, basically night clubs, seem to go on until 6am by which time it has been light for a couple of hours.

I did wake up a few times in the night listening to the thump thump thump of the music coming up the hill but the beer is a good aid to slumber. I half expected to be kept awake by the thump thump thump of all the youngsters in the adjourning tents with their own personal all night sessions but they all seem to be as quiet as mice when they're not arguing. Shame, I was hoping they’d drown us out. Instead, it looks like we need to show them the ropes.