The Blot On The Landscape

Hell may be about to freeze over, again. Yes, the Blot on the Landscape is here.

I drag L kicking and screaming down to Pride Park from where the second running of the re-launched Derby Ramathon will take place. Last year the start and finish were held at Elvaston Castle when the race returned after an 18 year gap. This year it moves closer to the city by starting and finishing in the shadow of Derby County’s stadium. Sadly not inside it due to ongoing closed season pitch renovations. It’s too hot for the dogs, so they are left at home.

The route is similar to last year's, in that it again takes in Shardlow, Ambaston, Elvaston and the Castle grounds but there’s a bit more purpose to route this year, less jiggery pokery to get the distance in. 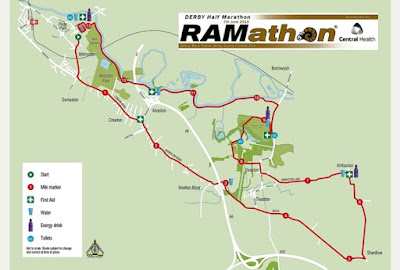 After escorting L to her start pen and making sure she is wedged in enough to avoid escape, I head to my own pent where I promptly bump into a fellow dog club member. It’s not often you see a dog club person running for more than the 40 seconds it takes to get around an agility course so here we have a clear exception. It’s also clear, we have a race on.

I start and almost immediately see my parents supporting. They don’t see me, so I do a wildly unpopular about turn and swim against the tide of 2,700 runners to get back to greet them. Then having wasted valuable seconds, I’m back on it.

The aim is steady eight minute miles all the way round and therefore a finish time of around 1:45. It probably won’t happen but it’ll be fun failing.

It’s a very flat course straight down the A6 (or whatever it’s called now it’s been bypassed) from Wilmorton to Shardlow, so pace management goes well. It helps that there are plenty of supporters out on the course cheering us along and there are plentiful supplies of iPro to swig on. Scrub that last bit, iPro may contain more natural ingredients that your standard sports drinks but it really does taste disgusting.

It all goes swimmingly well and on pace until at the seven mile point when my knee seems go. This is it, game over, time to walk home. Unlike at last week's Outlaw Half there's been no soft grass to run on and the pounding on the tarmac has taken its toll.

However after hopping on one leg for a quarter of a mile or so, the knee seems to go beyond pain and I continue... and continue. All the way through Elvaston Castle and back along the surprisingly well supported river path to the finish.

I finish in 1:46, a missed target for sure but one I’ll put down as just outside the wire of the bullseye rather than one that sailed wide and landed in the next field. Job done and a better t-shirt than last year.

We briefly meet up with my Mum and Dad at their place afterwards before heading home to placate the dogs enough so that we can leave them again later to go to the Hand and Heart for Sunday lunch. Then the Blue Monkey for a Chocolate Gorilla or two and finally a Tuck in the Borlase.