There is a bit of a queue for our 'private' showers this morning but it's nothing significant. The breakfast queue is more slow moving but it'll be easy enough to get breakfast down on the main site.


So day one of live bands at Glastonbury sees us heading down into the festival to catch the ‘special guests’ who are opening the Other Stage at 11am. This is unlikely to be the much talked about secret set by Ride unless Tim Burgess has simply been winding everyone up by Tweeting pictures of his wellies implying that it could be the Charlatans opening up the festival. 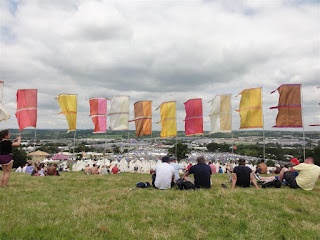 Well, it is the Charlatans, surprise surprise. The classic festival band but sadly not a terribly exciting one. Never mind, we in an open mind mood and anyway we want to see the Cribs who are up next. From the opening ‘Mirror Kisses’ to the closing ‘Pink Snow’ The Cribs are excellent but then I’m biased. 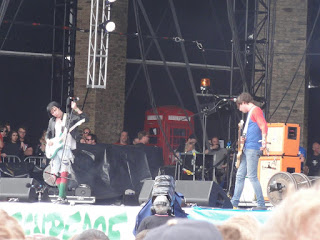 After which we head off to the next lot of ‘special guests’ in the far too small tent on William's Green. It becomes my life’s ambition to actually get inside this tent at some point and this is obviously where Ride are going to play their secret set or not. There’s no chance of seeing inside the place now though, as another much leaked guest appearance is playing. This time it’s Bastille. So no, not Ride.

Having heard weird things about the Michael Clark Company who opened things up today on the main Pyramid stage with a dance route to numerous Bowie tunes, we head off to catch them in the Astrolade Theatre. Dancing in Usain Bolt skinsuits to well know fare like ‘Heroes’ and ‘Jean Genie’ but also to lesser known ‘Aladdin Sane’, ‘Chant Of The Ever Circling Skeletal Family’ and ‘After All’ it’s a set for the Bowie fanatic, the dance fanatic and the Lycra skinsuit fanatic. 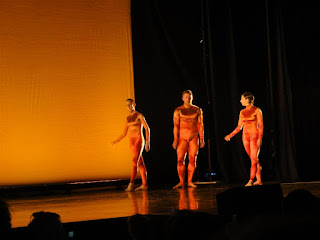 Having discovered the excellent Cockmill Bar with its range of local ales we’re been hanging around there a fair bit. It’s a handy place to be when we get the first rain of the festival as well, as we pile into the nearby Acoustic tent. Entertainment is supplied by Stornoway, who are no doubt pleased to pull such a big crowd by accident.

Once the rain has stopped we do another site tour and find the Rabbit Hole stage, where we take a look at Jake Isaac before we visit Wolf Alice on the Park Stage.

Now it’s dilemma time. Does one see Motorhead up on the Pyramid, Lulu in Avalon or the Vaccines up on Other. Despite the fact it is now raining again the Vaccines win and a good choice that is too as they put in one of the performances of the festival including a perfect ‘Wetsuit’ performance.

There’s still time to catch a bit of Lulu who is really giving it some in Avalon, we settle into the wooden shack next door, the Avalon Inn, for a few beers and a listen. The Avalon tent itself is rammed.


After the few hours of rain the site does get quite muddy for a while but the drainage seems to be so good these days the ground is soon drying out again. The sunny weather also helps.
.
Then it’s off for our first visit to the Pyramid stage for more ‘special guests’. Ride? I doubt they’d be up on Pyramid and recent rumours seem to be about to be confirmed that the Libertines have been flown in by helicopter.

Tonight the Libertines simply prove they are not a main stage festival band. They are a small venue band where their shambling songs come over as charming and endearing. Up on Pyramid they just look and sound sloppy. I've seen enough of Doherty live to know it’s a well engrained trait. Carl Barat though knows better but probably needs the money. To be fair to the band, the crowd are pretty sloppy too and everyone near us talks through their set. Don't you just hate that?

For some time now, several years in fact, I’ve had this image in my head of Pete Doherty at 50 playing a gig of his finest moments of which, let’s be clear, there have been many. Only he plays them all in tune and error free using the experience that comes with age. It would be awesome. Let's hope he's around to do it and I'm around to see it.

Still, I’m glad I've seen them at long last and the middle section of ‘Music When The Lights Go Out’ and ‘What Katie Did’ was more charming than shambling.


Tonight's continent is Africa as we go for something East African and spicy to eat.

By now we’re missed the Courteeners (who I like but have seen loads of times), TOY and the Proclaimers (which may have been quite jolly). Shall we also skip Florence, yes I think so.

So it’s Enter Shikari or Lamb then? Or back into the pub. I think the latter wins, tomorrows another day.


And then bed. The thump thump thump doesn't really keep me awake tonight but the unzipping of the tent flaps and a girl staggering, I assume drunkenly, into our tent does. Luckily we point out her error before she climbs into our sleeping bags with us.
Posted by FitForNothing at Friday, June 26, 2015