It rains overnight and up to about noon, so we stay under canvas. There’s not really much happening down at the festival until the Palma Violets at 2:15 anyway. 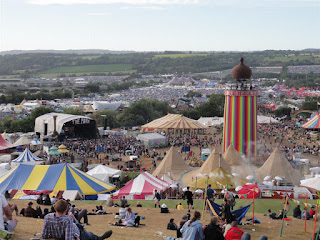 We head down eventually and visit Silver Hayes which we’ve neglected so far. Princess Slayer is up on BBC Introducing and we pop into see Ruth Royall in the lovely named La Pussy Parlure. As we wend our way back to Other, Adam Cohen is just finishing. He is then followed by an excellent set from the Palma Violets. 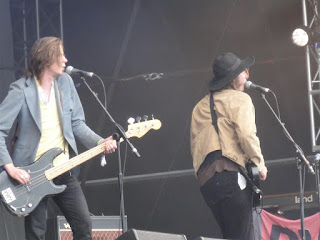 Yet again, despite the earlier rain, the site has once again rapidly dried out and returned to a practically bone dry state.

Could it now be time for Lionel Ritchie? It does look very packed in the Pyramid field with a plethora of Lionel masks, flags and t-shirts asking what it is you’re looking for (various variations). However we desperately wanted to see the Biggles Wartime Band in Croissant Neuf. Some Irish lads we’d met had implied this could be Mr Biggles’ (aka Jolly Jock) farewell gig. They provide an entertaining set including an awesome reworking of Robert Palmer's ‘Addicted to Love’ among others and a guest appearance by Sammy the fish. 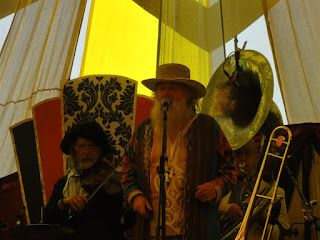 There are more cover versions over at the Acoustic next with the Bootleg Beatles who are running late and cut short by the same harassed stage manager who seems almost about to combust in frustration. 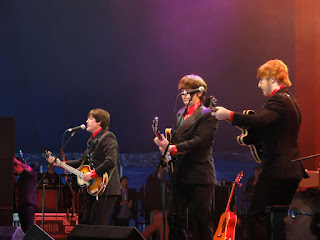 Life is much more tranquil up on Other to Belle and Sebastian but we don’t stay. We swerve around Paul Weller (no offence) and opt for a patch of grass up on the Park hill, an Otter Ale having belatedly discovered Trickett’s real ale bar and The Fall.

Impressively through our five days here we've bever had to queue for food, toilets, beer, phone recharge or anything. As regards the toilets, despite dire predictions, these are nowhere near as bad as you'd think or the ones I've been to say at the Leeds Festival, which were truly dire.

Tonight's food is Soulfood from Manchester, well more of a Mancunian Mexican Pulled Beef Chilli creation with that black rice stuff. It's been an excellent food week.

Then it’s back to Other for a burst of Jamie T but then do we do the The Who or head for Leftfield and the Buzzcocks. Good choice, what a way to close the festival. I mean the Buzzcocks not the Who. 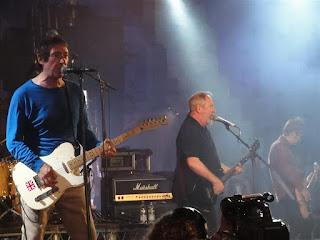 Although that’s not the end, just yet. There’s still time to make our first trip to the John Peel stage (sorry John) and FFS. The collaboration of Franz Ferdinand and Sparks, who are excellent.
Posted by FitForNothing at Sunday, June 28, 2015