In the morning we find that our late night visitor has left her wellies and her cardigan in our porch. I put them outside the tent and they are very quickly claimed or nicked.


We head down to the main site, which has rapidly dried out and we go in search of money. There are numerous cash machines around the site that charge a £2.50 fee but there is one set of machines at the main entrance that are free, which is at the opposite side of the site to Worthy View. So we hike up there and find no queues.We've not had to queue anything and that's not bad with 170,000 on site.

Of course as it's Saturday, L should be parkrunning but that's something they haven't thought of here, yet. 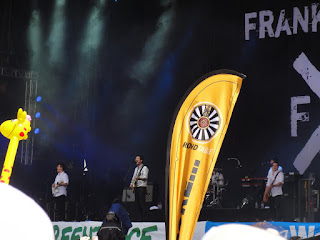 First up today on Other is the perfect festival fare of Frank Turner, who confesses he’s already played an intimate set around the campfire in Strummerville. If only we’d known, it’s just at the bottom of our hill. I wonder if he saw Ride there. His set, as ever, is brilliant even if he does make up sit down and the get up again for ‘Photosynthesis’. There are no concessions for the old folks’ knees.

We get to Pyramid early today, in time to stretch out on the grass in the sun and listen to the Waterboys. You could almost stay there all day. Then George Ezra comes on and brings half the festival with him. Folk who also seem intent on staying all day. 2,000 is company, 70,000 is a crowd. We decamp, which is a shame as we’d quite like to have seen Burt Bacharach who is up next, just for the novelty.

Next stop is the Acoustic for Tom Robinson. Who now looks quite an old man but still rocks like a youngster. When he finally gets on stage that is, as they seem to have problems setting up his equipment and the harassed stage manager gets more and more harassed as the precise punctuality of Glastonbury gradually goes t*** up, in the Acoustic tent at least. Then when Tom finally gets on and after a brilliant ‘Up Against The Wall’ he breaks a bass guitar string (no mean feat) and has to improvise. After taking requests from the crowd he plays a real favourite in ‘Grey Cortina’, which has probably never been done acoustic before and probably never will be again. A real treat. 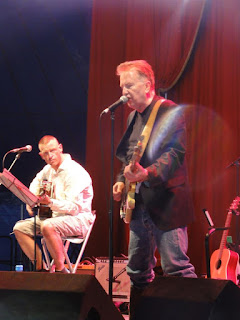 We had intended staying in the Acoustic tent for a while because Texas were on next but they have cancelled and their replacement Rainy Boy Sleep is currently pulling the biggest crowd of his life with those who haven’t heard the news.

We slip around the corner to that impossibly small tent on William's Green and Courtney Barnett, who we wave at from a distance as we can’t get inside (again).

Today's t-shirt, my Brakes' 'Won't you shut the f*** up? I'm just trying to watch the band' one, also goes down well. We're not the only ones who hate people talking over the bands. Tonight's dining experience comes from Morocco as we have a Tagine.

We then return to the Acoustic tent for the triumvirate of Nick Lowe, Paul Carrack and Andy Fairweather Low. They are a brilliant collaboration playing a collection of each other’s songs but also a few too many covers of other artist’s songs when really their own back catalogues are rich enough to be plundered. 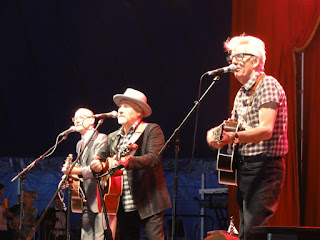 Next in the still impossibly small William's Green tent are the Palma Violets and again, we wave from a distance. No matter, they are up on Other tomorrow.

On the way back to camp is the Park stage, although we pass Leftfield on the way where Enter Shikari (again) have the place rocking. Up on the Park are Spiritualized, as impenetrable as ever. We debate the long, possibly mile long, hike to the John Peel to see Suede but opt for the camp site bar instead. There was always Kanye I suppose. Nah. 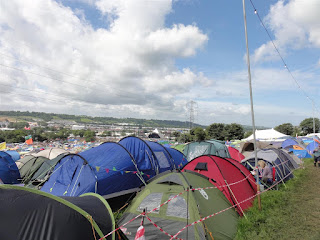 Posted by FitForNothing at Saturday, June 27, 2015