I bike to work and then with no sign of us getting the use of a shower at home anything in the near (or far) future I use my gym pass to go for a shower at the Derby Velodrome.

L walks the dogs on her own and after battling with the deer, its rutting season although they seem to rut constantly if you ask me, she tells me that someone told her they’d sacked the chap who used to cull them and the new chap is apparently doing it all wrong.

When I pressed her on this she said he's not shooting enough females. Which I though was quite sexist even if females are naturally more trouble. There’s probably some rule that says they have to shoot equal numbers of each.

The workman is fitting the new ceiling lights today or at least he was until he left at 3:30. I take it he’s not coming tomorrow? Thought not.


The last time I saw Feeder in 2012, which was the last time they toured, they were supported by Macclesfield’s The Virgin Marys. Déjà vu. Look who it is again. 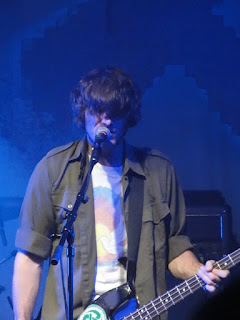 The Marys are a three piece that play loud and fast. You know, pounding drums, heaving bass and screeching guitar. They are brash but tuneful with a sound that just doesn’t really let up. Yet lead singer Ally Dickaty seems such a nice boy when he's not swearing and screeching into the mic. When he is screeching into the mic he's quite a good singer. I bought a CD the last time I saw them and by the time they finish with the brilliant ‘Just a Ride’, I’m thinking I might do so again.

After a four year break Feeder are back to promote their new album ‘All Bright Electric’ which they are plugging before the start with a £5 download offer being projected continually on to the back wall. Then David Bowie’s Space Oddity comes on, the track they have been taking the stage to on this tour, and the volume is cranked up. We are about to get started.

Tonight the band have their fullest line up since the Silent Cry tour of 2008 with the return of a second guitarist as Tom Gleeson joins the band for these gigs. Grant Nicholas and bassist Taka Hirose are backed by their usual keyboard player Dean Deavall while Geoff Hollroyde is the man on drums. 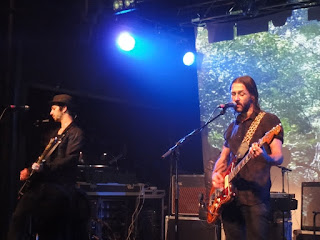 Kicking off with ‘Another Day On Earth’ off the new record, a ‘power ballad’ of sorts that builds from a quiet keyboard driven introduction with the guitars and drums gradually joining to take it to a crescendo of noise before it dies off again for a gentler finish. It’s quite an opener.

Next up it’s the heavy guitars of ‘Universe of Life’, which is a much rockier tune reminiscent of their early albums. Which is a sound they have been harking back to much more of late with the ‘Renegades’ and ‘Generation Freakshow’ albums.

With the track ‘Renegades’ up next, it’s not a start for those who are looking for a populous set full of the hits. I’m already thinking that a lot of people down the front aren’t going to know anything other than the big singles given how indifferently some people have received the opening three numbers. 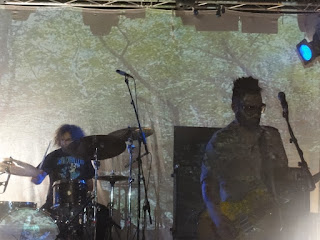 Then they kick in to the hits.

From here onwards, aside from the tracks from the new album, it is very populous with eleven of the remaining twelve songs played all coming from one album - 2006’s Singles Collection.

Of these, it is ‘Pushing the Senses’ that really get things going and the resulting mosh reorganises the symmetry of the crowd displacing the indifferent ones towards the back. Now suddenly everyone down the front knows everything. Subsequently the other non Singles album track ‘Borders’ get a much better reception than ‘Renegades’ did and becomes, surprisingly, one of the highlights of the night.

Of the new material, 'Eskimo' is classic Feeder, a combo of quiet verses and louder choruses, which will hopefully become a bit of a favourite. It has a ‘fever’ vocal line in the chorus which sounds very like ‘Feeder’ tonight. 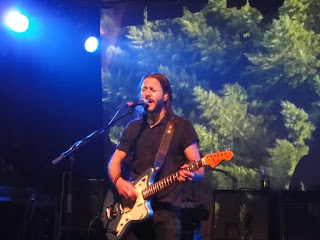 Another new track ‘Paperweight’ is one I’m not so keen on and feels more of a ‘lightweight’ amongst the other selections off the new record. Such as ‘Geezer’, which is the complete opposite, and another much heavier number. Then there’s 'Infrared Ultraviolet' which is played as part of the encore. It’s classy, stylish and just beautiful.

The main set closes with ‘Buck Rogers’, a track that Nicholas has tinkered with live repeatedly over the years. Currently it has a stripped back almost acoustic intro before leaping into life. As does the crowd. Not that it matters much how they play it because everyone is far too busy singing back the words and jumping around. In fact Taka Hirose may well be playing ‘Enter Sandman’ rather than Buck Rogers.

The band return for the encore and blame the venues curfew for making the crowd choose between early old school classic ‘Sweet 16’ and massive hit ‘Seven Days In The Sun’. I am impressed by the size of the shout for ‘Sweet 16’ which probably shows that it could easily be included in the main set but it is dwarfed by the shout for ‘Seven Days’ which is what we then get. Although I would say that the vote is skewed slightly by a lot of people around me yelling ‘both’.

The night of course ends, as is tradition, with a jump around to ‘Just A Day’.

It’s a cracking gig and it’s a long time since I’ve bopped down the front throughout. I would, of course, have liked a deeper delve through the band’s back catalogue but they are probably right to return after such a long break with a hits strewn set.

Nicholas has already made all manner of set list promises for their gigs next year and there is also talk of a mini tour to celebrate the 20th Anniversary of their debut album ‘Polythene’. So next year could be really special.