It’s the Leicester Half Marathon today and my third time of competing in it. The course remains unchanged, on road until almost half way then back through parkland before a final bit through the city centre and the climb up the only real hill on the whole course.

I do love this race which feels like a really small time race even though it’s a 'big city' one. It could really do with a big sponsor\organiser to come in and move it on a bit. There is huge potential here, numbers could easily be doubled I would think, for what is very underrated race.

Throughout the race my pace is almost identical to last year’s, at each split I’m hitting almost the same time. Last year I did 1:40:01, so this year having dragged myself up that final mile uphill it’s a case of leg it as hard as I can once the course flattens out again around mile 13.

I’m not usually one for a sprint finish and this one almost finishes me off. I tumble over the line and collapse in a heap on the tarmac. My watch says 1:39:59 but what does the official timing say?

It isn’t until much later that I get confirmation that I have indeed managed to drag this ageing body over the line in under 100 minutes. Albeit by just one second. If the drinks at the feed stations hadn’t been in cups I’d probably have broken it more easily.

Are they telling me that if I’d been doing half marathon’s 20 years ago I’d be breaking the holy grail of 1:30? B******s. That's a bizarre statistic that I didn't need to know.

L says it would've been more handy if they're predicted my race time in 10 years’ time. I’m not convinced, I’d just end up killing myself to prove it was wrong.

Afterwards I drop L off to do the gym and a sneaky sauna, clearly she doesn’t want to risk our new shower which I go home to test for the first time. It is good and powerful but it could be hotter. I will have to get the man to tweak it.

In the evening we have a rare trip to the Savoy for a film.

Apparently the film rights were acquired to Paula Hawkins’s ’The Girl on the Train’ before it was even published. Obviously they'd had a premonition that it would be a big hit and they’d have ‘Gone Girl 2’ on their hands. So before they’d realised that its very British setting would be a key reason why it was taken to its reader’s hearts they’d already exported it to America.

So out goes the grim commute through the London suburbs with terraces and semis backing on to the line and in comes upscale New York with its mansions and lush green gardens. Oddly Rachel even gets a seat for the whole journey. Everything is completely Americanised bar oddly our lead character Rachel, a professional drunk, played by the very British Emily Blunt. 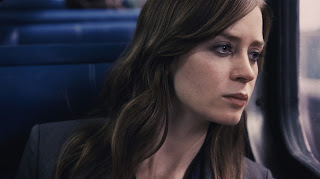 Now we've all done the daily commute to work at some point. The same places, the same faces, the same overheard conversations, the same overheard music, day after day. It’s enough to drive you to drink. Well Rachel loses her job but still does her commute for reasons only she can rationalise. Perhaps rail season tickets are cheaper in New York than they are in London?
Every day she gazes into the homes that pass by her window, swigging her vodka from her drinks bottle as she goes, and becomes particularly obsessed with one couple Scott (Luke Evans) and Megan (Haley Bennett) who she sees groping each other on their balcony. 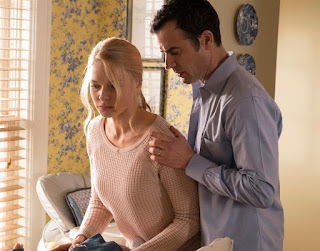 Ironically they live only a few doors down from her old house where her ex-husband Tom (Justin Theroux) is now shacked up with a newer blonder model in Anna (Rebecca Ferguson). Rachel imagines that both these women have it all or in Anna’s case both Rachel’s ex and the baby she couldn’t have. Rachel becomes a professional stalker.

The film, more so that the book, has come under fire for its portrayal of women and it’s true that all three women are hardly role models for female empowerment. They are all essentially victims of their own men, who are naturally deceitful and controlling, and perhaps (whisper it quietly) themselves. In fact the whole lot of them, the men as well, are messed up beautiful people with too much time on their hands. Only one of the three women works, part-time, sometimes.  So unable to get their collective acts together it’s perhaps not surprising that they have affairs with each other instead. 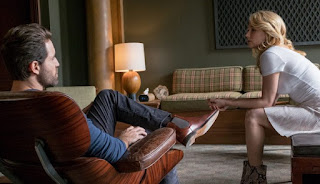 It’s certainly not a feminine drama even if there is a lot of talk about babies even from Megan, a borderline nymphomaniac who is so messed up that she starts seeing a therapist Dr Kamal Abdic (Edgar Ramirez). However once it dawns on Megan that her therapist is a man rather than just a therapist, she tries to seduce him as well, naturally. 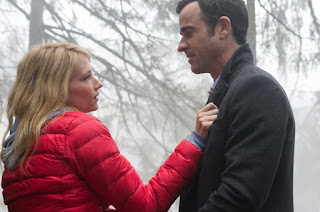 Then Megan goes missing and Rachel finds herself embroiled in the police investigation as a potential witness too drunk to know what she’s witnessed.

So it’s a cocktail of real life. You know infidelity, alcoholism, chauvinism, voyeurism, lust, lies, manipulation, murder... it’s a checklist of all the things you'd perhaps like to get away with but can't and don't obviously and of course you're not even allowed to think any of these things out loud anymore. I thought it was wonderfully entertaining. 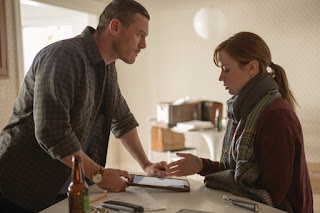 Throw in an absurd amount of sex scenes just for good measure, preferably involving trees, and it’ll be just about perfect. Oh, they did that as well.

The plot itself is fairly transparent even if you haven't read the book, well at least I thought it was, because the murderer looks like a murderer from the moment you first see them on screen.

The acting isn’t too shabby especially from Blunt. Rachel looks dreadful most of the time, half dead mostly, which is a credit to Blunt who can do this look in her sleep. I would recommend it but it’s probably best watched Rachel style with a drink in hand.

Afterwards we head to Canning Circus and drink in the Falcon, the Borlase and the Blue Monkey where L finally gets herself some Chimpagne.