It’s the Shelton Striders 10k today which a race I’ve not done for quite a while and I’ve not done it at all since it moved to its new home at Boulton Lane Park Community Centre. My Mum and Dad come to see us at the start and then depart to watch along the route. We head to their place afterwards for coffee.

The race starts on the old canal path before heading off towards Sinfin, doing a bit of a loop which included the new road to what I think they call Infinity Park before returning to Shelton Lock where it finishes again on the canal path.

L runs with the 65 minute pacer and almost goes under 65. I am just over 46 minutes, which is a bit disappointing. A 45 would have been nice.

Back home I cut the lawn but it’s more a case of hacking it short as it’s still very wet.

I have promised L death, gore and zombies this weekend so later we go to Broadway to see the Girl With All The Gifts. The film opens with children being strapped into their chairs and being wheeled under armed military guard to their school classroom. Clearly in the future all truancy problems have been solved.


Well, not quite. What we have here is a futuristic tale that is a slight variant on the currently fashionable zombie film genre. The zombies which inhabit this world have been created by a fungal infection but act pretty much like your stereotypical zombie. e.g. see a human, chase it down and eat it. 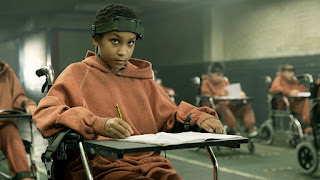 However these children appear to be different. They were infected while still in the womb and evolved into a next generation who think more like humans but still have the overpowering desire to eat human flesh.

The remaining 'real' humans have managed to stay safe from them by using blocking gel to mask the tantalising smell of their own flesh and, of course, by locking the children up while they try and find a way forward.

For Dr Caroline Caldwell (Glenn Close) the way forward is to find a vaccine and that is how Melanie (Sennia Nanua), seemingly the most intelligent of the bunch, eventually ends up strapped to the Dr’s examination table about to be chopped up in the name of science. 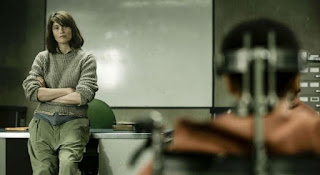 The group’s teacher, Helen Justineau (Gemma Arterton) prefers a different approach. She sees enormous potential in working with these children and when the military base where they are housed is overrun by the undead, she is the one who rescues Melanie.

A group of them are now on the run under the command of Sergeant Eddie Parks (Paddy Considine) who would rather just obliterate them all. Melanie repays her teacher’s kindness by helping the group stay safe by distracting the hordes of zombies who lurk in the streets. 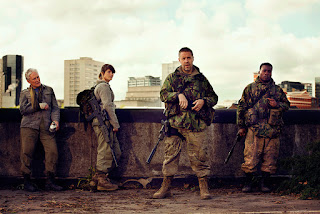 Along the way they find out that the fungal infection will eventually move onto a second even more disastrous stage.

The film has an interesting concept but it’s problem is it really struggles to get this across and it’s very difficult to see where they are trying to go with the story. Although clearly it is trying to ask who is being the more humane... the humans or the new breed of zombies? 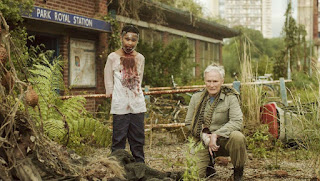 It also has the usual horror film problem of people doing nonsensical things and getting themselves killed. In this case, a soldier laying down his arms, his armour and his radio. Oops.

It’s not a bad film but I think it could clearly have been better. It’s also best avoided by cat and dog lovers.


We have a drink in the Lord Roberts before, then a Supreme and pizza 1n Broadway afterwards. Then we head to the Peacock where yet again the OP isn’t very fresh and I think it’s about time to give up on that place. The Golden Fleece isn’t even open which is a shame, so we end up at the Poacher. The Salem Porter doesn’t seem that fresh either but Sherwood Reserve is in good shape.

Both of L’s sister’s kids moved are now at University in Nottingham. Somehow, accidentally, they ended up not only in the same city but at the same Uni and in the same accommodation block. We don’t see either of them staggering around Nottingham drunk tonight but then it was a Sunday.