Yay it’s my birthday. Although in many ways it’s almost indistinguishable from any other day. 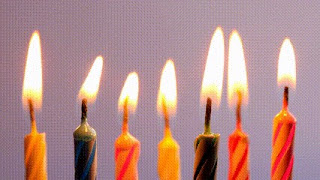 I have a pleasant bike in to work, which isn’t unusual, after having a very pleasant time before I even got out of bed, which isn't unusual either. Upon arrival at work, I don’t get greeted with cake, just my usual bowl of porridge. I do get a card from everyone at work which continues the theme of needing glasses and alcohol.

L says told you so, things wouldn't change once you reached 50. Nobody even mentions having a mid-life crisis and buying a Porsche and\or running off with a younger woman. Not that I can afford a Porsche even if I wanted one and they don’t make younger women like they used to.

I do get an odd gadget from one of my friends, so odd I'll need to google what it is.

L gets me a ‘marathon package’. New trainers, a promise of a Birmingham Marathon entry (should I remain uninjured) and a pre-race massage by her Pilates chap, that is if no Swedish blonde wants the job. He can always wear a wig I suppose but it wouldn’t be quite the same.

In the evening, in another non-departure from the usual, I play squash and my opponent doesn’t even let me win. Although it is satisfying that he suggests a sixth game rather than our usual five and he is practically crawling on the floor by the time the next pair knock on the door to rescue him.

Afterwards we go to the Dispensary, where we do stray from the usual script. We have a meal and Daughter joins us.