This morning we sample another new Parkrun this time at Shipley Park, which thankfully is nowhere near as hilly as the one at Bestwood. Of course we also sample the café afterwards.

Then it’s the final home match of the football season as Derby take on and beat Wolverhampton Wanders but in what is really a totally meaningless fixture.

In the evening we’re at Broadway to see the Handmaiden with a Shipstone’s Nut Brown Ale in hand.

The Handmaiden is an adaptation of Sarah Waters' ‘Fingersmith’ by Park Chan-Wook, the man who made one of my favourite quirky films ‘Stoker’. The original was a sort of Victorian Dickensian affair but Park has moved the story to Japanese occupied Korea in the 1930s. Which is an odd choice but we’ll go with it. The dialogue is in both Japanese and Korean with different coloured subtitles for each language which is a nice touch, if a slightly surreal one as it’s largely pointless. 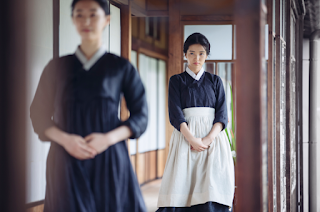 The story revolves around a young ‘fingersmith’ Sook-hee (Kim Tae-ri) who is hired as a handmaiden (aka a maid) to a Japanese heiress Lady Izumi Hideko (Min-hee Kim) but she has an ulterior motive but then to be fair, so do most of the characters. Her aim is to persuade Hideko to marry Count Fujiwara (Jung-woo Ha) who is actually a conman and whom she is working for. Once he has married Hideko he says will commit her to an asylum and steal her inheritance. 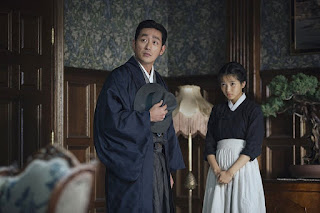 Things begin to go a bit tits up (if you excuse the rather appropriate phrase) when the two women start making lustful eyes at each other seemingly from the off. This could well be due to their complete isolation in their mansion and also the complete lack of any heterosexual options, although this is obviously a very un-PC thing to say. All the men are repulsive characters who would rather get their sexual kicks at the ‘erotic’ book club ran by Hideko's unpleasant Uncle Kouzuki (Cho Jin-woong) where Hideko herself is required to be the narrator. Previously it was her aunt, who went on to hang herself from a tree. 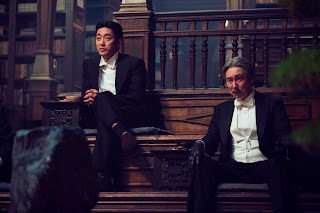 When Hideko asks Sook-hee how the Count would make love to her once they are married Sook-hee demonstrates, albeit with an improvised girl on girl version. The film doesn’t hold back in it’s coverage of this but it’s all very tastefully shot and you find yourself admiring the fantastic cinematography... among other things. It even seems almost educational, I mean scissoring, does anyone really do that in real life? Please enlighten me. 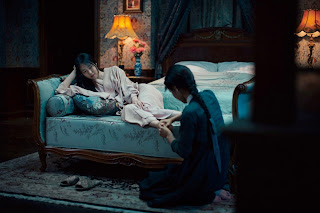 So now the two lead female characters are in love or at least in lust and there’s barely yet been a conversation between the two.

At this point, I should perhaps mention that the story is divided into three parts and part two revisits part one from a different perspective. This involves revisiting scenes as well as moving back and forth through time. Which isn’t as confusing as I would have thought. 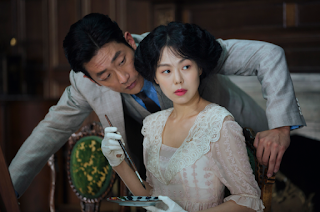 The first two parts were really clever but the third part got a bit messy and the whole thing ends up a bit disappointing with a scene near the conclusion that seemed unnecessarily violent and out of place with the rest of the film.

Even so I enjoyed the film and if you love a good tale of lesbian passion with your tales of jealousy and betrayal then this one’s for you.
Afterwards, there’s more Brown Ale on offer in the Scribblers, which L now tells me is one of her least favourite pubs because the wine is son crap there. So we move on to the Blue Monkey where they not only have Amaretto Gorilla but a strong 5.0% Monkey Mild as well.