MD and I run the Forest Rec parkrun this morning while L is a tail runner and Daughter makes her parkrun début. It’s quite a family affair. Naturally Daughter picks what is a fast week to do her first one but still does brilliantly.

Its also the day she get the keys to her new flat which is over in almost posh Mapperley Park. You could be pedantic and say it’s only just in Mapperley Park but in it is. We start moving some of her things in but we’ll need the man with the van again to move the big stuff.

Tonight we are at the Nottingham Playhouse for the first time in ages to see The Grapes of Wrath. This is a special request from L, who is struggling to get through the book along with the other 100+ novels on her book pile. It is a shame then that I have to keep nudging her awake throughout and her me.

The story concerns the Joad family who, in the 1930s, travel 2000 miles from poverty struck Oklahoma to hopefully find a better life in California. It is a journey that takes it toll on everyone, mentally and physically including a few deaths. So it’s quite a harrowing story or it’s supposed to be. However this production sees a bit of a rewrite of the story and is, I assume, intended to be a critique of the current migration situation.


This means that the dress code for the Great Depression era is relaxed and alongside characters in 1930s-esk dungarees we have others in tracksuits, jeans, Lycra leggings, a full superman outfit and (possibly the one good pun in the production) an ‘Are we nearly there yet?’ t-shirt. 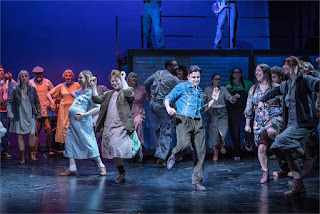 This re-jigging of the story even included real jigs and there was a lot of unnecessary singing and dancing, including a very puzzling song about user car sales. All of which took time away from the actual story and some meaningful character development.

Those underdeveloped characters were large in number and extremely diverse. This included a multi-racial casting within the same family, which of course I understand the intent of but it really didn’t make things very easy to follow. Nor did the lack of attention to the ages of the family members who were meant to be siblings, parents and grandparents etc.

Then there was the sparse set which comprised of two large transparent containers which I think were supposed to signify their assorted means of transport and lodging but it was generally difficult to keep track of what they were supposed to be at any one time. For me it looked like the play was mostly set in a carriage on the London Underground. The real live river at the front of the stage was a nice touch though.

In the end, the production came over as neither contemporary nor true to the gritty realism of the original novel and I do like a bit of grit. I’m really not sure what John Steinbeck would have thought but he would most probably have hoped for something a little more coherent. It was just a bit of a mess that left you coming out of the theatre feeling neither entertained, educated nor inspired just confused.

I certainly needed the bottle Springhead’s Robin Hood ale they now sell there as well as the drinks afterwards in the Room With A Brew and the Blue Monkey.