The course has been tweaked several times in the past and looking back through the old course maps this variant seems to be quite like the 2006 version, which was the last time they took it around the Bass Recreation Ground rather than straight up the dual carriageway. I’m not sure why they changed it, probably just because I started entering. 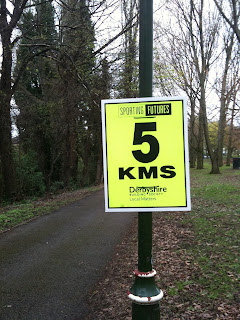 Personally I’d like them to get even more retro and go back to 2004. In those days the course was just one loop rather than the two loops it is now. Nowadays after returning to the start after 7k they send you out for a smaller second loop around Pride Park, which is a real mental tease.

Both L and I were talked into this year’s race by various friends, colleagues and relatives who wanted to enter, and needed their hands holding. Almost all of whom have since fallen by the wayside, before even reaching the start line. So L wears two numbers today, one underneath the other, the second one belonging to her absent sister to get her a t-shirt whilst I contemplate strapping my chip to one foot and L’s sisters to the other. She’d get an excellent time for her first 10k then but I decide against it.

Protégé is here though. Damn, the race is on. Although he’s trying to avoid me on the start line. So I sidle up to him for a chat. 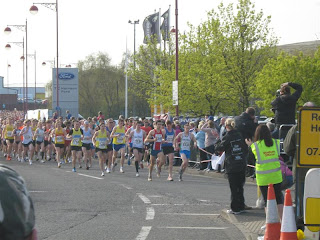 I endeavour not to do anything stupid in the first km as we partake in the long drag out of Pride Park, where the crowds are large and supportive, which helps. 4:01 is quicker than I wanted but acceptable. Km 2 is exactly the same, as we do the Hokey Cokey around the pedestrian areas of Derby’s shopping area. It’s still a bit twisty; they haven’t eliminated all the twists and turns. The centre of town is not very busy, so not much support there. There’s a trio of girls on East Street with a CD player, who appear to have a bit of a mime thing going on. It kind of sums the quietness up. It’s a consequence of starting the race before the shops open. It would be nice if they could start later and run it when it’s busy, although they wouldn’t be able to use these pedestrian areas then but I think the support would be good even on the main roads. Plus they’d get some of those wonderfully critical comments in the newspaper from people who’s Sunday had been totally destroyed because the road had been closed and they’d been half an hour late getting to Wilco to buy some nails. That always makes it all worthwhile.

Things are more raucous on the Wardwick though, where there’s cracking band playing. We need more of that sort of stuff.

Km 3 is slightly quicker but then my times start to drift a little but never beyond 4:18. If Protégé is going to beat me he’s going to have to run sub 41:00 to do it.

They take us on to the new/reintroduced bit, as we head between Stalag Arriva Trent Barton (the new bus station) and the court building, before heading onto the Bass Recreation Ground. Then it’s back on to Pride Park, over the flyover (the only real hill) and now the stadium is in sight and getting ever closer. Once it’s in touching distance... it’s time for that loop around Pride Park, up past David Lloyd’s and then the 2.5km haul along the footpath to the finish.

We finish in the stadium, which is nice but not as well arranged as at Reading where it felt like you were running out on to a packed Wembley Stadium. A three quarter lap of the pitch and then we’re finished. 41:18. Not a PB by a long chalk but not bad and ahead of Protégé which is the main thing.

Then as its Mothers' Day, we take my folks, who’ve been supporting us, for a meal and a beer at the Royal Standard. Then despite the urge to paint the town red, mainly at not having to drown my sorrows, we stay in and open some red instead.