I finish work at lunchtime so that we can get an early start to get up to the Lakes. We wouldn’t normally bother leaving before 6pm but they’ve installed barriers at the camp site to keep the late arriving riff raff out. So I thought we best get there before 9pm. Which is the time when the razor wire is rolled out and the watch towers become manned.

I head home via Sainsburys for some pre-race bananas. Then I pack. As I check my emails at the same time one pops into my inbox from L asking whether I’ve been out training for the April Madness 10k with Motor Mouth yet, it was formerly the Wiggle 10k but we’ve renamed it. Erm, not yet. I had mentioned I might start training with him today. I can see that L doesn’t think I’ll do it, does she?

I have the usual problems getting him started. E.g. a lot of lead biting but then we’re off. His nose in the air looking for trouble as we head onto the park. I choose to go on the park, purely to maximise distractions. Which was ok, until we met a distraction. He had a quick lurch at the first dog we met but that was all. The second one warranted a bark and a lurch, at which point we momentarily lost focus and went back to the lead biting. We stopped, had a team meeting, discussed strategy, decided who was boss (I think) and then carried on with focus returned. So it went well. We only ran about 2k but it’s a start.

Then I load all the gear (and the dogs) in the car and head off to collect L. We arrive at Great Langdale to discover the barriers are still not in operation, so we needn’t have rushed. This also, unfortunately, gives us extra time in the Hikers Bar of The Old Dungeon Ghyll Hotel. Where L insists on following her usual three halves of beer pre-race strategy. Unfortunately they appear to be serving the beer in out-sized half pint glasses tonight, which to the untrained eye might look like pints and it's doubly unfortunate that the beer is 5.6% Old Peculiar. 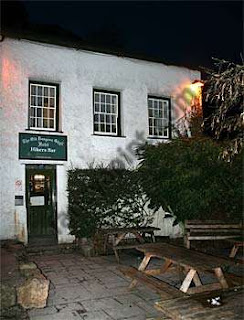 After the three, there’s the one for the road, which is the narrow lane we have to walk down to the camp site, it’s a long way, 200 yards perhaps. So three and a half out-sized halves of Old Peculiar then. L's rewriting the pre-race manual here.

I like her style but I’m far more sensible and water down my Old Peculiar down with a Cumberland Ale. Which is cunning of the highest order I believe but we’ll see who has had the best strategy tomorrow.