Pandemonium On The Podium

Today’s the day, MD’s running début. The Wiggle 10k at Catton Park. There are just over fifty proper runners, that is ones that aren’t attached to pooches. 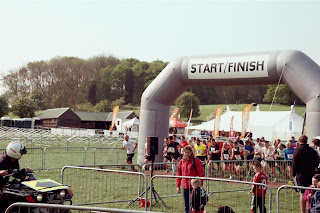 They start off at 10am and L is among them. The crazy ones set off at 10.30am, there are only eleven of them but MD and I are among them.

Predictably there’s chaos at the start, eleven runners with dogs, many of them with more than one four legged companion. There’s an awful lot of barking, as they try to get everyone together and to pose for a photograph in front of a 4x4 with ‘running with dogs’ on the side. It’s not going to happen. Eventually they accept this fact and that each ‘team’ is going to want its own space, which one of the team will ‘protect’ as if its life depended on it.

I find a nice spot that is so far removed from my usual start position that I might as well be in the next field, on second thoughts it might be quieter there. This is MD’s first race and caution is the watchword here. Then suddenly, and thankfully, we’re off.

Note to the organisers - a 90 degree left off the start line followed quickly by a 90 degree right is not the best for a group of out of control runners being propelled along by hyped up canines to negotiate. Amazingly I don’t think there are any collisions but I’m not sure what was happening behind us. I had tried to start at the back but MD had other ideas and was soon pulling me up through the field. Despite me trying to take it easy with him, we record a sub four minute first kilometre. You could say, he’s a chip off the old block.

The 10k course is basically cross country and it’s partly on the equestrian cross country course, thankfully the weather’s been dry, so the ground is firm. I would have hated to have done this in the mud. Although I do have my new off road shoes on, I have no desire to test them in proper conditions.

My partner is amazingly focussed. Of course I never doubted him, although some did. He does not bark, snarl or lurch at anyone, neither dog or human. He just elegantly glides me up through the field, passing each partnership that we come to. We even pass a nice young lass running with two dogs. Had this been a normal human 10k I may have dawdled behind her a little while, making use of vital recovery time in her slipstream or something like that but today we go hurtling past. Today, we take no prisoners.

We do meet our match with a second lass who seems to be going at exactly the same pace as us. Except that when she’s in front her dog looks over its shoulder at us and slows down, where as MD is itching to get in front. Only once he’s in front he looks over his shoulder at them and slows down, where as her dog is now itching to get back in front. We trade places for a while, neither able to pull away.

MD stops to shed some weight but we soon catch the pair of them up again and resume our badly choreographed formation. At around 4.5k we come to a water station, well it’s a horse trough but all the dogs seem to be using it as a water station. We arrive there just as two others depart. Personally I would have skipped the drink and used the chance to catch up those ahead but MD dives in, front paws first and pretty much dumps his head in. Hot work this.

Less than half a kilometre down the track is the actual water station, with drinks in cups for the humans and in bowls for the dogs. Badly placed me thinks. Also as it’s hot we could have done with more than just this one or at least with it being a bigger distance from the trough.

On to the next section and we pause briefly when we get tangled around a tree. MD chooses one way; I choose the other with inevitable results. Perhaps something else the organisers could note, there are a lot of trees on route to get a lead tangled around.

We catch up a chap with a husky who’s answering a call of nature. Well the husky is. We overtake but chivalrously let them back past us later. This is such a friendly race.

As we come into the final section I hear the tannoy say here comes 2nd, 3rd and 4th. We are 4th but just behind the other two, including the husky I was so nice to. Bugger. I had no idea we were that high up. Had I known... we’d have put the hammer down, wouldn’t we MD?

We cross the line to be greeted by L, who has finished her race and by Doggo, who doesn’t appear too distressed at not having been selected to run.

So we come in 4th but here’s another story... two of them were women, which would normally be cause for major distress but today it means I am second male. We are on the podium. Annoyingly, I feel we could have done better.

We hang on for the presentation and to savour our few moments of glory. We accept our prize and take our place on the podium only for MD to be determined that no one else is going to step foot or paw on the podium whilst he is there. Not even the winning husky. Oh dear, how embarrassing, he is such a bad loser.

Later, the football and Derby’s final home match. It ends like most of their home matches this season, in defeat. No one seems too bothered, especially not the players. Then there is the traditional pitch invasion afterwards but anything that stops the players doing an undeserved lap of honour is fine really. The players appear in the director’s box instead.

It’s been an interesting season, not. We sold our best two players early on and once they’d gone we nosedived from a play off position to flirt with the bottom three instead. Somehow we didn’t get relegated but we did manage that memorable FA Cup defeat to non-league Crawley. Despite that and losing twice to Forest we did at least beat Leeds home and away. So it’s not all been bad. Next season will be interesting. Patience has run out. Both the America owners and the manager will be run out of town if things don’t improve drastically.

Things improve tonight though, when I meet up with L for a night out in Derby. Snecklifter again. This time in the Flowerpot and we also try the revamped Five Lamps. Not bad. We were even impressed with the food menu, well we were until they told us that was the old food menu, the new menu one had all the decent stuff taken off. Austerity I guess.