I again take my running partner out this morning. That’s MD by the way. L accuses me of favouring her over MD this morning. As if. She takes the old man for an amble that probably won't make it onto her training log. She says it was just like the old days. Slow and steady with the odd drag off to the side for a rather excellent sniff, plus a roll in the daffodils. I hope she means Doggo.

Then I cycle to work. It was quite funny the other day to see the CTC, the national cyclists' organisation, responding to the AA giving out bike helmets and high visibility vests to cyclists in London by giving out copies of the Highway Code to car drivers. The AA were attempting to highlight the vulnerability of cyclists on the road. The CTC were highlighting the reason. Although granted some cyclists bring it on themselves.

51:02 is very good for the bike to work. Being chased by that guy in the Beeston Cycling Club top certainly helped. Red rags and bulls spring to mind.

Knackered now though. I crawl up the stairs at work, then realise I’ve forgotten my cereal and have to crawl up them a second time. It’s a long time since I did three cycles to work in a row and a couple of morning runs.

L swims. 50 lengths. She always has to go one better, or in this case 10 better, than I managed the other night. So she’s feeling smug and even smugger because everyone at work likes her new frock. They get all her best outfits at work.

Squash is off. My opponent has added a new injury to his repertoire, a bad toe. That’s so nineties and so Gary Lineker. As I'm now at a loose end, L invites me to come and see Beastly with her and Daughter...

It's not really my scene but all the same I have a look at some of the photos of the film. The lead guy seems to have had some sort of trendy tattoo job done to his head. 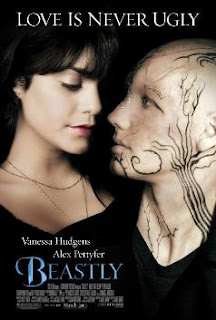 Is that supposed to make him unattractive? Cause people pay a lot of money for such a makeover in the belief that it will enable them to actually pull the girls. I suppose the film wouldn’t attract its target audience – teenage girls, if they did actually make him ugly. It looks like a good one for me to skip me thinks.

So instead I take the boys on the park but MD is hopeless, apparently he’s already had a two hour walk with Daughter. Doggo hasn’t but then he’s always hopeless.

L has left some chicken cooking in the oven for Son but as I get home from the park with the intention of doing him vegetables and potatoes to go with it, he’s already about to scoff it on its own. I still offer 'the works' but he says he's ‘good’. You try and do your bit to make students healthier but they’re just not interested.

I cook paneer curry for us and L ‘pretty pleases’ a mushroom side dish. If she comes home in that new frock, she can have anything she likes on the side.