Should Be Quicker Tomorrow

The race is a 12 noon start. So plenty of time to work off last night’s overindulgence or alternatively to shred the pre-race manual some more. There was no pre-race pasta last night, only ham and cheese rolls. Then on top of last night’s alcohol, I’m even drinking coffee this morning which is usually a no no. Breakfast kind of goes out the window as well. Instead L’s munching on Pringles which I don’t think features on the must do list. At least I’ve brought an energy bar to go with one of the bananas.

The Great Langdale road races started in 1988 with the Christmas Pudding Run. There is now also a Marathon and a Half Marathon as well as these races in April, the Saint Georges Day 10k's, now in their 12th year. One race on Saturday and another on Sunday. It's a week early for Saint Georges Day but we'll let that pass.

The course is an out and back, slightly undulating route, along the Great Langdale Road. Starting at the Stickle Barn pub, running through The Langdale Estate before emerging in Elterwater and returning to the finish at the pub. 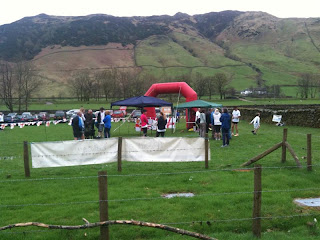 Conditions are almost ideal and it's not a bad run, considering my preparation, which couldn’t really have been any better. It just wasn't honed for running. At around 42:20, I’m 90 seconds or so slower than my best time here two years ago. Oh well. They do say 'the older you get, the better you used to be'. Perhaps if I’d been on OJ and water all night things would have been different but never mind.

L is running again tomorrow, whereas I prefer just to concentrate on one race per weekend. It will be interesting to see what her pre-race approach is tonight compared with last night. I think it’s going to be the Stickle Barn this evening, which have possibly the best line up on the bar I’ve ever seen in 15 odd years of coming here. Hobgoblin (although not very Cumbrian), Cumberland, Coniston Stout but I think the winner is the old fave Jennings' Snecklifter. Only 5.1% to OP's 5.6%, so L should be quicker tomorrow. In theory.