On the bus, some call it tapering, for a jaunt around sexy Stoke on Sunday.

Have you heard that they’ve declared a drought in eastern England? Apparently it’s not much better here in the midlands.

As I ride home from work on the bus, the driver can’t seem to find a fast enough setting to clear the latest thunderstorm from his windscreen. Oddly as we drive through Bramcote everywhere is white over. Snow or hail? I’m not sure. The rain eases off by the time I get off the bus in Nottingham but the deluge has left its mark. 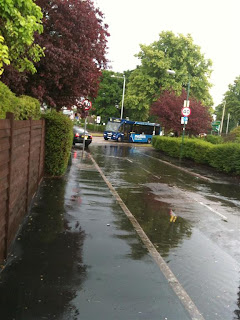 Though I imagine it’s the wrong kind of rain to ease the drought. 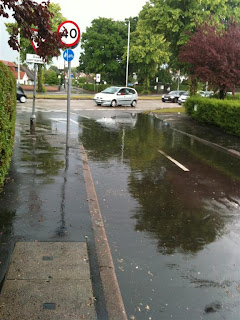 I get home to find one dog, bone dry, waiting for me to open the bedroom door so that he can hide whilst the other one is bouncing around in the garden in the rain and up to his eyeballs in mud, waiting for his ball to be kicked. They are so not alike. I take one look at the ominous clouds still lurking over head and axe the planned park session, whilst also refusing to kick MD’s ball on health and safety grounds. He sulks.

L’s at the pool, with the delightful pleasure of slipping into rain soaked clothes once she’s finished her swim.

Things do ease up later and MD does get his ball kicked, for a while, before we slip out to the Ropewalk for a few.