Making Plans For The Hunger Strike

I walk the boys this morning. It’s uneventful. L is incredulous. We did see a few of his favourite things:- squirrels/cats/dogs/people, but he was fairly chilled about them.

I’m walking the boys because L is cramming in the swimming training as it’s Windermere in two weeks. She reckons she’s on target for an hour and a half for the two mile swim. Hang on a sec. L has a target? That slipped out. She takes it all far more seriously than she usually admits to.

I go to the Clifton Leisure Centre webpage this morning and yep, there are the secret plans to flatten the squash courts. Well they were there until the website was mysteriously updated at 8.45am and all reference to the changes removed, just as I was trying to fill in the feedback form. This is turning into a full blown conspiracy. It looks like the hunger strike and chaining ourselves to the squash court door is the only way to proceed with this.

OMG... Look what they've done to the Birmingham Half.

It's been Bupa-ised. The event has become part of the Bupa Great Run series and has been relaunched as the Bupa Great Birmingham Run. So that's the end of EDF’s 'Race Against Climate Change' then... I wonder who won? Bupa are taking over everything at the moment and fast becoming the Tesco of running. I’m not looking forwarding to next year’s Bupa Great Nottingham Run.

Well, at least it should run like clockwork, though they still seem intent on starting 15,000 runners on Broad Street but I'll be doing it anyway, I have unfinished business.

At lunch time I collect old faithful, so I'll be back on my old bike next week.

Then at night we revisit the Ruddington Beer Fest. It is split over three pubs. We start in the White Horse Inn, which is incredibly busy and has a very good range of beers. Then on to the Red Heart, which you can tell isn’t quite as into its beer but they made a pretty good effort and had even got bands playing on their back lawn. Then we finished up back at the Three Crowns where we were last night and take advantage of the curry deal offered by their own Indian restaurant, which is in the back of the pub. A very good night. 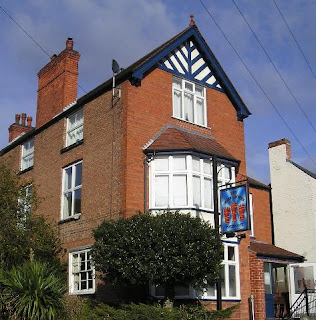