Race two of the weekend and I’m involved in this one. The Ronhill Great Langdale 10K Trail run with a nice relaxed start time of 12.30. After some awesome overnight rain, well it sounded great on the tent roof, the weather gradually fines up through the morning and the race is run in the dry. 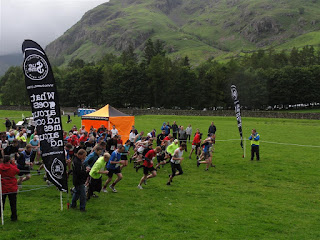 Now I don’t like trail running, at all. Nice, smooth, flat tarmac for me, thank you very much. This however turns out to be ok. Just ok mind. 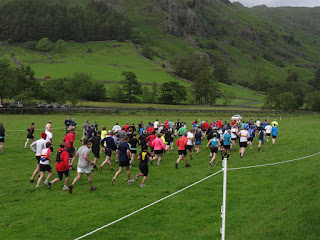 It’s mostly on good trails, some gravel tracks and even has a longish tarmac stretch. There is a rather tricky, rocky and root strewn section down by the river, which I opt to walk across, rather than fall head first into the river but the rest is fine.

The scenery is, of course, gorgeous and I even remember to have a look at it, apart from when tiptoeing alongside the river. There was one serious hill and that wasn’t that serious, certainly not considering where they could have sent us. Bowfell anyone?

I come in 13th out of 73, so that’s pleasing. My time isn’t bad either which perhaps indicates it wasn’t quite 10k. However it’s more accurate than the advertised half marathon which shortened itself to a 20k before they even started. That started thirty minutes before the 10k and I was pleased to get home ahead of anyone in that race.

On the plus side it was very well organised by the chap I think who treated us to the Windermere Triathlon last year. We got a good pre-race briefing/spiel/monologue, lots of way markers and plenty of marshals. There was however no chip timing or a t-shirt, both of which were advertised. Neither of which is a problem, except when you pay £25 to enter event, as we had for this one, and start to wonder what you’ve paid for.

Which turned out to be an energy bar and a bandana, which isn’t really going to get worn by most people and I guess Ronhill couldn’t sell them either which was why we got them. A T-shirt next time guys and no excuses, if only to advertise your race and up the numbers which were perhaps a little down on what you expected but not too bad for a first running of an event. 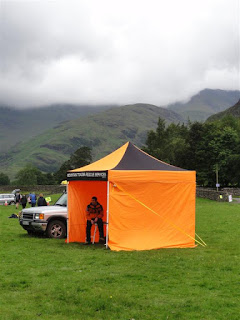 Particularly considering there was not only the Great North Swim on but another swim up at Derwent Water and, probably their main competition, The Great Lakes 21km Run not half a mile away down the valley at Stool End Farm. Now that was a serious undertaking, they did send their competitors up Bowfell but they didn’t stop there. A scenic tour of Upper Eskdale followed via the two highest peaks in England, Scafell Pike and Scafell. Not for me thanks. Later there was a guy on the campsite bemoaning his four and a half hour time. Sounds blindingly good to me.

We head down to the Old Dungeon Ghyll to rehydrate. Yes ok, for the Old Peculiar and a Cumberland but in the evening we return to the Sticklebarn for a second go at the Snecklifter. Problematic is the fact that Keswick’s Thirst Fall has been added to the bar which is also very nice. 4.8% and much darker than I remember. I decide to alternate.