A Fight To The Death In The Street

I did L’s trick this morning and get on the wrong bus. A brand new red Trent bus with Derby on the front turned up, so three of us got on it, assuming it was the Red Arrow. It wasn’t. So I took the scenic route to work.

The Royal College of Psychiatrists have announced that people over the age of 65 should drink a maximum of only 1.5 units of alcohol a day, just 11 units per week. That’s because older people are less able to process alcohol and the drink might also interact with medication they may be taking.

They are seriously missing the point here. Having reached the age of 65, those folk have clearly worked out what is good for them. Meanwhile the rest of us are desperately trying all they can to get to that magic number, or whatever the magic age is to by then, partly to piss the government off and claim a pension. Once there surely all bets are off and we can all drink ourselves into oblivion.

L runs home, via the canal, so that she has the option to drown herself on the way. Ah, hard day at work Dear? She should save her drowning for a glass of 1.5 later.

I may have a few more than 1.5 tonight but I’ll put a brave face on it. I meet up with a couple of old school friends, have a few beers, compare our lack of Olympic tickets and then we head off to find something to eat.

As we walk down the row of curry houses on Midland Road in Derby, both the Viceroy and the Shalimar try and prostitute us through their doors with tempting ‘offers’. We fell for this at the Viceroy before but the offers disappeared once they’d got us through the door. Although we did get a free drink when we complained about the slow service.

For a moment we consider getting the two to face off against each other, in a kind of a fight to the death for our trade in the street but we’d still need to get the winning offer in writing. Perhaps in blood.

But we don’t, we skip past them both and go Nepalese, sort of. The Mount Everest Gurkha Restaurant is just around the corner on London Road, I didn’t even know it was there. It’s Nepalese and Indian but judging by the menu, more Indian than Nepalese. That apart the food is very good and the place busy, which is always a good sign.

They even have a Nepalese beer called Gurkha. It looks interesting, tastes ok but turns out to be from... Horsham. Oh well you can’t have everything. 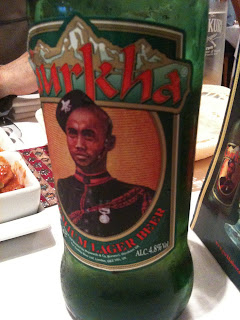