L reckons she’s just done her last ever paper round covering for Daughter. That’s a shame. I've always enjoyed the personalised service even if she never did don the
short shirt and white ankle socks like they did when I was a lad.

L’s sister has Olympic tickets. Bravo. She’s the only person out of around twenty that I know who got any. At least I can brag that I know someone who got a ticket even if I can’t go myself. She’s become a minor celebrity.

According to the TV some people got three lots or more. That shouldn’t be allowed. Of course I could have got up at 6am to try and got a foot in the door for the one remaining reasonably priced athletics session but everybody will be doing the same thing and the website will grind to a halt. So I didn’t. By the time I did check at 8.30 everything bar football, weightlifting, volleyball and wrestling had gone. All sold by 6.45 apparently.

Daughter floats out of her last exam, the one she was least looking forward to. It seems to have gone well. I hope she quoted Chomski, Skinner, Piaget et all. I would have done.

My dodgy calf is improving all the same but still I opt out of tonight’s race. A good call, as it rains again, just like last year. It’s the start of a busy week for L. Four runs and a Glee concert in the next eight days. Now that’s a punishing schedule for anyone, particularly the Glee concert.

The race, the Heanor 5 miler, is at Shipley Cricket Club and looks to be quite challenging e.g. hilly. I might have liked those hills but never mind, I spectate instead. There’s quite a crowd watching, a noisy crowd too or was that just Doggo and MD. Doggo is always noisy at races because he feels he should be joining in but MD has never been that bothered until recently. Now he’s becoming a right pain, perhaps ever since I did that one race with him. It’s not warm to spectate either, I’m glad they’ve got coffee laid on. 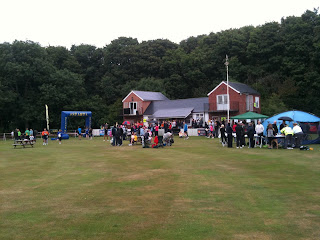 The goody bag is good, which comes my way. A drinks bottle, I always need new drinks bottles, and a selection pack of High 5. Useful to me.

We get home at around nine and head into town, via the chip shop, which is perhaps a mistake. It wasn’t brilliant. We head into town on the off chance that Daughter decides to join us for a midnight drink, when she becomes 18, because I guess one of our local pubs where she’s been going since she was five wouldn’t be quite what she had in mind. In the end though she doesn’t, so we have a pleasant drink on our own.