A Reunion That Out Reunions All Other Reunions

I take L and Daughter to the station for their 8am train to London. I hope Daughter can stay awake. It’s Glee today, in that big tent thing in London. Not for me thanks.

The boys and I have a busy day at home. We have to, with the park shut for Batman and Robin. We cut the lawn and the hedge. Which I manage to do without cutting through a wasps’ nest this year.

L texts to say she has no need for her carefully planned directions as they simply need to follow the stream of teenage girls to the venue. On the way they stop to sip coffee on London Bridge. Hmmm, alright for some. I’m kicking a ball around the garden. They’re on the margaritas now, not sure if that’s pizza version or cocktail version. If it's the later, it sounds like the lunch budget is already under strain. And a Brazilian... I'm awaiting confirmation on that one.

Then, with the boys asleep, I channel hop to try and get a glimpse of the main attraction at this year's Glastonbury, without success. All I get is replays of a one legged Jessie J, which is no better than the two legged version. There’s not even a glimpse of the legendary Wombles.

Their first gig since 1976 has already been banished to a 2pm slot on the Avalon stage, the preserve of folk like KT Tunstall, after Michael Eavis said he regretted booking them. Eavis does not seem to grasp what a momentous occasion this reunion is. A reunion that out reunions all other reunions. Either that or he’s been leant on by the likes of Bono and Chris Martin who were worried their bands would play to near empty arenas if their sets clashed with the furry legends.

Thankfully there are a few clips on YouTube but nothing on the BBC site yet.

Oooh Superwomble and The Orinoco Kid, I'd have paid good money for that but oddly no ‘Let's Womble To The Party Tonight’. Come on guys sort it.

What we all want to know now is, are they going to tour? If so, I’m there.

At 10pm I collect L and Daughter from the train station, L brandishing her Glee t-shirt. 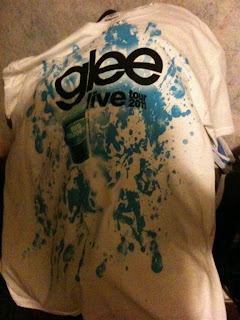 A good day apparently, despite the gig, oh apparently even the gig was good.