I’ve got an exam this morning or is it Daughter who has the exam? I’m not sure, what with all the bathroom based learning I’ve been doing, in the shower, brushing my teeth, on the loo etc etc. Thanks to all the post-it notes everywhere, I feel ready for anything.

Take Jean Paiget's ‘Sensorimotor Intelligence’. If an object moves out of view it ceases to exist. Rather like Daughter's dirty socks or a used plate or an empty margarine tub. We live with that phenomenon every day. I’m not sure how old Paiget was when he wrote that but he was obviously still a teenager at heart. 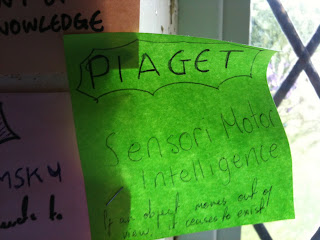 The late Douglas Adams had another phrase for it in 'Life, the Universe and Everything', he called it ‘Somebody else’s problem’, an S.E.P, something the brain just edits out, like a blind spot.

It seems I’m not taking the exam, so I walk the dogs instead, while L reinvents herself as the paper girl. Which just leaves Daughter with simple matter of sitting the exam. Teamwork eh?

Well it was going to be tennis but as the weather predictions were so bad we booked squash but in the end it’s sunny, so we cancel squash and blow the dust off the tennis racquets. I was dreading this but in the end I quite enjoy it. A 2-6 6-3 0-6 defeat. I was desperate to get to the pub at the end, that’s my excuse anyway.