You Have To Laugh

Billy D gets the bullet from Forest. You have to laugh. I think we all saw it coming but it’s still funny. Billy just doesn’t get on with chairmen particularly if they're called Nigel Doughty. No doubt another club will be lining him up to see if theirs can do any better. Guys, save your money. 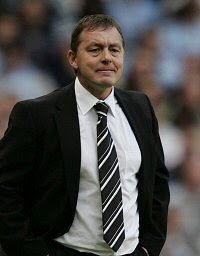 L’s out tonight, running with friends. Which always seems to get organised for the day after a hard race. Apparently they bump into some ‘hashers’. A drinking club with a running problem. They sound like a ‘sane’ bunch, they have ‘hares’, I assume that’s the run leader, called ‘Shagulator’, ‘Butt Plug’, ‘Rectal Probe’ and ‘Andean Sex Beast’ among others. Is she sure running is the only problem they’ve got?

I’m not dog training tonight. I have committee meeting instead and some good arguments hopefully. I'll take that back. After tonight’s meeting I could really strangle somebody.