It All Ends, I Think

A lazy start to the day, horizontal, and there’s no great rush to get up and take the dogs on the park as it’s raining again. So once we emerge from the duvet, I catch up on the cycling instead, much to the dogs’ frustration. It’s raining I reiterate to them. MD hops from paw to paw (‘so what?’), Doggo nods, understanding, yet still looking through the door with a longing look (for a football) in his eye. I give them breakfast to shut them up. Well, lunch actually, as its gone 12:00. The rain does eventually stop and we make it onto the park.

Then it’s into town for Butter beer and Muggles Mead. I examine the pump clip for Muggles Mead and see it’s a Nottingham Brewery product. So it’s going to be very pale and quite bitter then. Yep. Like all their beers.

‘It all ends’ here of course. I’m all for that, as long as they hang on a few minutes whilst I quickly revise part one (whilst the adverts are on) and then tee-up the subtitles (Wikipedia) for part two. Now is not a time to get lost.

So, Harry Potter and the Deathly Hallows Part 2. The film picks up swiftly from where part one left off, with Johnny No-Nose (Mr Voldemort to you) stealing the awesome elder wand from Dumbledore's tomb. Now I am invincible... and all that... cackle, cackle, cackle etc etc.

Meanwhile our three heroes continue to play hunt the horcrux to undermine Voldemort’s invincibility idea, as usual surviving only by the skin of their teeth. 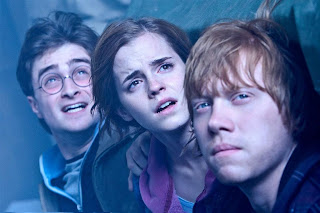 In one instance stealing a dragon to escape from Gringott's Wizarding Bank, destroying half of London as they go before ending up in a lake. With all three of them soaked to the skin, Harry and Ron take off their wet clothes and share a ‘manly’ torso moment, well, until Ron can no longer hold his stomach in. In the last film it was Harry and Hermione in a topless clinch, I hope this isn’t a weird reworking.

Then with Hermione beginning to unbutton her dress, we all (the men) sit there with bated breath. Go Hermione go, but no, this time she keeps her kit on. That could well have been the moment when you'd wished you'd paid extra for the 3D version but, typical girl, she'd rather be cold and miserable.

Anyhow back to ‘horcrux watch’. Pretty soon they just have two left to destroy. There is Voldemort's snake Nagini and then rather inconveniently they find that there’s one imbedded in Harry himself. Oops, that’s a bit weird and a bit tricky too. Harry says his goodbyes and heads off to sacrifice himself for the greater good.

RIP Harry... or rather not. Let’s just say, he got out of that one nicely. Just don’t ask me to explain it, even Wikipedia didn’t seem sure.

Which brings us to the final battle. 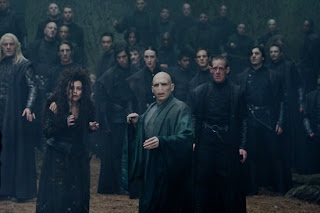 Of course there’s a battle, as there must be, but as ever battles leave me cold despite the wholesale attempted slaughter of the students (nice thought). It’s all a bit too exciting for me, I preferred the doom, gloom and depth of part one but I cope. The film is exciting yes, but it’s mainly the Daniel Radcliffe show, fair enough, while Emma Watson pants and gasps in the right places and Rupert Grint sucks his stomach in and smashes the odd horcrux.

Severus Snape bids a tearful goodbye, slaughtered by Voldemort and his tears, yes his tears, reveal an interesting secret he’s been keeping to himself.

The pleasantly deranged Bellatrix Lestrange checks out too, in a costume that Tim Burton probably has his wife Helena Bonham Carter wearing for the weekend lie-in, and explodes into confetti. An interesting way to die and less messy I guess.

I would say Maggie Smith stole the show, as Professor McGonagall, you’d certainly want her in charge of protecting your castle, if it wasn’t for Matthew Lewis as Neville Longbottom who steals several scenes. 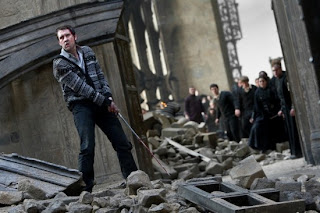 He has the best line for a start, with a cheery “Well that went well” as they all narrowly escape death, to stepping forward to single handedly denounce the dark lord and slaying Nagini, Voldermort’s snake, the final horcrux. Then all of a sudden Voldemort gasps his last and the movie kind of ends a bit quick.

The big question of course is does Harry get off with Hermione? Afraid not. Then does she get off with Draco Malfoy? Again sadly not, but wouldn’t that have been cool. Oh well, Ron will have to do then. Then we're back at King Cross Station platform 9-3/4, again looking very St Pancras, which must really confuse the American tourists. It's odd that at this point they suddenly leave the CGI paintbrush in its box and don't age the characters much for the final scene nineteen years on with them all packing their own offspring off to Hogwarts. Bless.

The first film came out in 2001, when JK Rowling was still working on book five. Since then its taken ten years, seven books and eight films but the marathon is finally over and I feel like I've run one myself. Like my running, it started well, peaked too soon, flagged a bit in the middle, made you momentarily want to give up, then got its second wind, ran the last stretch well and then tonight sprinted over the line. Just don't ask me for a resume of the whole lot. ‘It all ends’, I think.