This may not be as newsworthy as the furore about the News Of The World but we have a new loo seat, the old one fell off. That's cheap tat from B&Q for you. L assures me I’ll hate it. Reason being it’s pink and spotty. She recommends I do the business with my eyes closed. 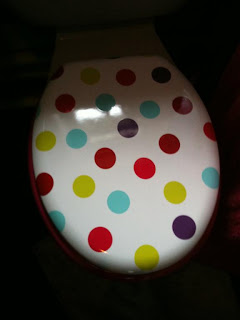 L’s murderous mood, nothing to do with me I hope, could produce a sub-50 time tonight. I’ll look forward to that. It’ll be prawn cocktails all round later then, although apparently that pre-race strategy is old hat. Tonight’s experiment is with rice pudding.

I leave work and walk the three miles or so to Elvaston Castle, while L gets the bus over. I have entered this one but I think I’m watching. I feel I ought to run but also feel it might be a bad idea. A gentle jog might do me good, but I don’t know how to gentle jog. My folks turn up to support, despite the fact I’m too decrepit to run it.

I seem to have supported at this event so many times but I’ve never ran it. Last year I was saving myself for Crich the next day, in previous years it’s clashed with the Erewash and/or Hathersage triathlons that I’ve run. This year was to be my year, pre falling off the bike that is. I think I’m destined not to be in this one.

It rains again as usual, so at least I’m out of that. As I’ve entered I still get to pick up my t-shirt, the bright fluorescent yellow race t-shirt. Nice. 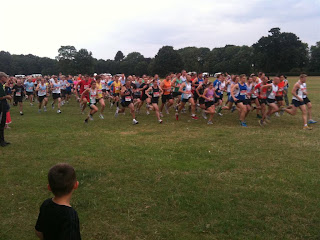 So how does the rice pudding go. Pretty well actually. L’s quickest 10k since Barnsley in November and only one second off that.

Afterwards we head over to Beeston and straight to the Wetherspoons which was excellent last time. Not so tonight, a poor beer range and appalling service, so we move on to the Crown which is better but the beers seem to suit L more than me. We leave with the idea of popping in for a late night curry but the place is already closed. Home for toast and a bag of crisps then.