Life’s Too Short To Be Injured

Two nights camping on hard ground didn’t help my bruised ribs, so a night in a proper bed was very welcome. My ribs are on the mend and as long as I don’t make any sudden movements I’m fine, but word on the street is that these things take time e.g. around four weeks and that’s not good news. Life’s too short to be injured.

Still, it all pales into insignificance compared with poor old Johnny Hoogerland’s injuries. He’s the chap who got shunted by the press car into a barbed wire fence during yesterday’s Tour de France. Have you seen the photos? OMG. I’m sure I’m not legally allowed to reproduce those photos, not that it’s stopped me before, but do have a look, from behind the sofa. Oh go on, here you are, everyone else seems to have reproduced them. 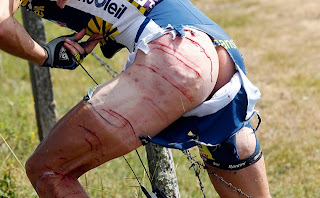 His legs are totally lacerated and it’s incredible that he didn’t sever some other vital equipment; that is apart from his legs.

The man’s already a legend for carrying on and finishing the stage, even if he doesn’t continue in the race. Luckily he’s got a rest day today to try and recover. I’m guessing as he’s got the polka dot jersey he will at least start tomorrow, if only to get his five minutes of fame and he has to pull up five miles down the road.

I’m late for dog training but not as late as everyone else. It’s ten past before anyone else turns up, I thought I’d been stood up. Wouldn’t be the first time. To kill time, I let Doggo help me put away the horse jumps that our kind hosts have again left out for us. Once in the arena, he marks his territory, then sits in the middle and refuses to leave. ‘I am training tonight’ his eyes say. Sorry mate you’re not, but I promise on Wednesday you are.