Only When I Laugh

I managed not to fall off the bike today. Meanwhile my ribs continue to improve slowly, only when I laugh as they say, luckily I’m at work and there’s nothing to amuse me.

L’s cycled too, claiming it was purely because she was a late. This is entirely her own fault for refusing to get up when there was still a six in the time. Blimey... that must be about three times she’s cycled now in the last month. She’ll get a reputation. Though I note that her bike doesn't come home with her this evening. Left at work hopefully and not dumped in the canal.

Have Greggs invented the perfect sandwich for me, the shape of the Mexican Bandit? I stumbled across it today, having grown tired of the inedible sandwiches being served up by the sandwich van. The bandit consists of spicy chicken, Monterey Jack cheese, jalapeño peppers and red onion topped with chilli sauce. Quite a combo. Then they spoil it by having a bit of mayonnaise lurking in there and of course there’s the white bread but it’s a good effort. Nice n spicy. If I cycle again tomorrow, I might be able to justify having another one. I hate to think how unhealthy it must be.

Later the boys and I pop onto Wollaton Park and check on the preparations for this weekend’s Splendour Music Festival. We’ll be there, well the boys won’t but L and I will be. 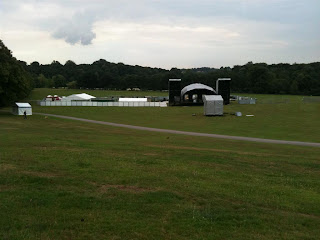