L is stressed, again. She’s off for chocolate, which she reckons may improve her race performance tonight. I’m so stressed, not really, that I’m off to the pub for pie and a pint. Which definitely won’t improve my performance but then it doesn’t need to, seeing as I’m not running.

There’s good advice from Miguel Angel Jimenez at The Open golf. Asked if he will celebrate his excellent round of 66 with a glass of Rioja, Jimenez apparently replied, 'it doesn't matter what I shoot, I always have glass of Rioja.' There's a man with a sound strategy.

As I doubt my PVR has decided to tape the cycling for me, I listen to it on the radio. Go go Johnny ‘33 stitches’ Hoogerland. Go go our very own Geraint Thomas, who is off the front, in the Pyrenees and leading the field up the Tourmalet. Bradley who? Geraint is 3 minutes ahead with 12k to go, of course it doesn’t last but it was good to get excited about it for a while.

Tonight the Hardwick Nearly 10k Run, 6 miles and 285 yards which works out at 9.917km. It’s been ran almost every year since 1981 and this is the 29th running. So I might be in it next year, as I can’t seem to resist a birthday celebration.

It’s an unmissable evening with Elvis laid on as post-race entertainment and the Rotherham United cheerleaders during. Which is ok for us who aren’t competing. Although their routine to Katy Perry at full blast drives me down the lane for a walk with the dogs instead.

Before the race starts this year’s ‘Mystery Runner’ lights three beacons on route from Hardwick Hall to the start in Pilsley. This year it’s Philip Harries, former GB Olympic 400m hurdler and also once part of the Olympic Bobsleigh team. He's running late. I guess 400m runners aren't used to running as far as three miles. 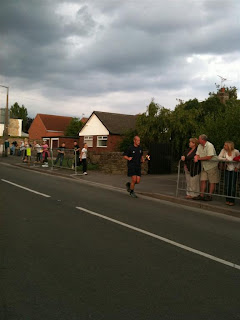 L’s prep not only includes chocolate but prawn cocktail as well. I’d be pretty ill if I tried to run on that, it’s almost as bad as a pie and a pint. I do try a short run of my own, around 1k, just to see how it goes and to assess the possibility of running the Tara Kinder 10k race tomorrow. ‘Listen to your body’ is what they say but mine is still arguing with itself. 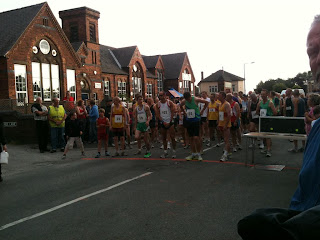 The course record is an impressive 30:54 from way back in 1986, on a very hilly course, and doesn’t come close to being broken this year. Although the winning time, 33:54, is still mightily impressive. L gets under the hour which is an achievement in itself.