An Odd Definition Of A Treat

Daughter has booked a coach from Stoke to Abersoch for her surfing weekend at the Wakestock Festival. Hey ho. So I leave home this morning at 6am to take Daughter and her friend to Hanley Bus Station. What is strange is that stowing away on the front seat is Son. L's simple explanation is that 'there’s a girl in Stoke'. Well I would hope there are plenty of girls in Stoke but I assume this is one specific one. I suppose poor students can't miss out on a free lift but it's a shame he couldn’t have had her over here, given he has an empty house.

In theory three excitable teenagers should have been a car driver’s nightmare but not at six am, they were all pretty much comatose most of the time. I drop the girls off right next to their bus bay and they promptly disappear off to find a McDonald's. So if they subsequently get lost, they’ve got no one to blame but themselves. Son had long since wandered off, killing time until it was late enough to text his lift. His parting words ‘God this is a depressing place’. Welcome to Stoke. Hope she’s worth it.

Commonsense and the fact that I find even a brisk walk painful after amassing fifteen bruises (approximately) in my bike fall yesterday, means I skip tonight’s final race of the Grand Prix series and support L instead. I think of asking her to push me round in a wheelchair but decide against it. At least this way the boys get a night out and a chance to bark at some runners. 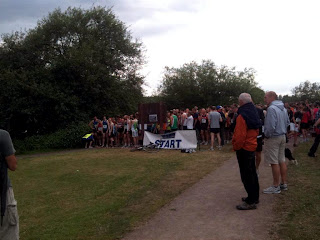 L does well again, again knocking over a minute off last year’s time. All of which will give her a good overall placing in the series. Better than mine obviously, having skipped this race I won’t get a final placing at all. I do still claim my series t-shirt, which is disappointingly long sleeved, which means it won’t get worn until November at the earliest.

I must be anticipating a soonish return to fitness and form because I enter us for the Cardiff Half Marathon today. We are so cosmopolitan. Stoke one week, then Wolverhampton, Harrogate and Cardiff. Wherever next? St Neots, Morecambe, Birmingham... the list goes on.

Cardiff is just the sort of huge mass race madness we thrive on, with 15,000 entries last year. Despite the fact it appears to be all around the Cardiff Bay area and looks a bit like a larger version of the Notts 10, e.g. laps around Holme Pierrepont.

I even book us a cosy cottage near Cwmbran, so that we can make a weekend of it. L offers to treat me to the Leek Half by way of a thank you. She seems to have an odd definition of a treat.