We let everyone else get on with the business of competing with their dogs this morning and head over to Adel, ten miles or so away for the Eccup 10 mile race. I had always intended to sit this one out but after my cycling mishap it’s looking an even better decision. Anyway, I love a bit of supporting. 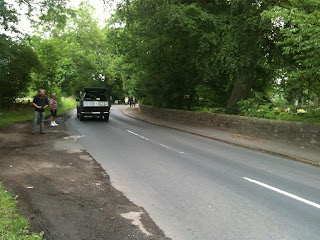 After the race has started, I have time to grab a welcome coffee or two, even more welcome seeing as we forgot out own coffee supplies and I was stuck drinking tea all day yesterday. There is only so much tea I can take. Then I use the runners changing facilities to grab a shower, as the dog show has neglected to provide such basic facilities.

I get back to the start/finish area just in time to see the winner cross the line five minutes ahead of the field and, checking my watch, in roughly 55 minutes. I think that’s impressive until I get nearer to the finish, see the electronic clock and realise that the race was almost near five minutes late starting. His time was actually 0:51:18, very very impressive and a new course record. 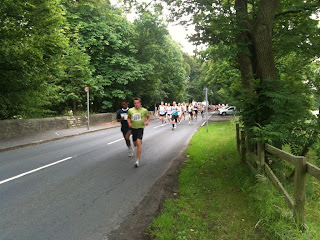 I’d have been over 20 minutes behind him. L will be a bit longer than that, time for another coffee I think and to watch a bit of cricket. There’s a junior game going on next to the finish area. A bit too close to the finish area really, which is really the only organisational failure of the race because all the runners end up walking on the cricket pitch. I don't think this would have been allowed to happen had it been an adult cricket match. 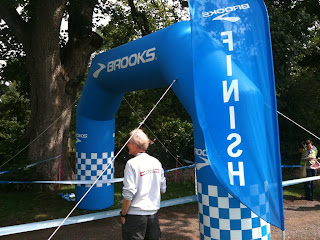 L comes in, in another good time, but in not quite her quickest 10 miles of the year. The race memento they dish out here varies every year. In 2007 it was a kit bag, in 2008 a mug (glad we missed that one, we have plenty of mugs), 2009 it was a rucksack and last year, they gave out a technical t-shirt. L chooses to enter in the year they decide to give out a paperweight... Not just any old paperweight but exactly the same paperweight we have already received from several other races. The Yorkshire crowd seemed pleased with this, it was something different for them, not realising that there’s a pandemic of these things in the Midlands at the moment and it’s clearly now spreading northwards.

We head back to camp, via Sunday lunch in a pub in North Rigton, which again sells exactly the same three beers as the other two pubs. It's just like the bad old days of the 70’s and 80’s when a few breweries had monopolies on the pubs only these beers are supplied by three separate independent breweries.

After taking the tent down we head home and find the house exactly as we left it. How many years has it been since that has happened? No dirty pots piled in the sink, no discarded socks down the back of the settee, the bathroom floor isn't underwater and there are even towels hanging up in there etc etc, I could go on. Utopia.

Then I settle down to watch the Tour de France and that horrifying accident caused by the press car.