I get up early to take the dogs on park as we have a 12:15 kick off for the Derby v Forest local derby today but then when I check the news, I find that the match has been called off and promptly get back into bed.

It’s so frustrating. I check the travel reports. Roads clear, buses all running, trains running. Chelsea v Man U on. Newcastle v Aston Villa on. Sainsburys open... clearly unconcerned about the safety of their customers.

Mystified and p***ed off in equal measure but probably not as mystified and p***ed off as all the people who travelled over last night or early this morning to beat the weather including the 30 guys who came over from Switzerland. Even the 'We only had 10 men' banner was ready and draped over a bridge on the A52.

Whilst it’s true that some fans may not have been able to get to the game due to the weather, equally this will also be true for the rearranged game, which will now fall in midweek. The match was even on BBC TV for anyone who couldn’t get. Maybe the sad death of Forest’s owner Nigel Doughty was a factor, if they'd give that as the reason then then we would have understood.

Instead I take boys on the park in the snow, which they love. 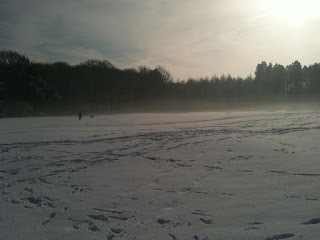 Although Doggo over does it and will probably limp for the rest of the day. 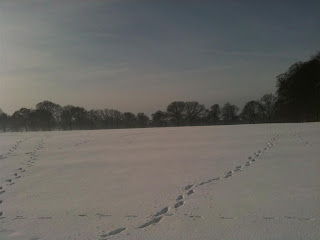 Meanwhile L goes for a run in the snow. Jealous. So when I get back from the park, I put my kit on and run as well. 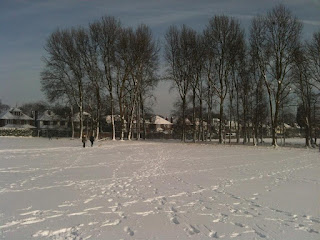 Late afternoon we visit the gym and I do 15k on bike, then it’s this week’s film. Rather bizarrely L chooses one about money. 'Margin Call' which is all about the sub-prime mortgage crisis and the collapse of the Mortgage Backed Security market around 2007/2008.

At some unnamed Wall Street firm they are letting go a massive 80% of the trading floor, security staff watch employees clearing their desks before they escort them from the building. One of these is Eric Dale (Stanley Tucci), a middle manager in the Risk Management department, who is laid off after 19 years of service. As he is lead from the building he hands a flash drive to one of his young analysts Peter Sullivan (Zachary Quinto). He tells him to take a look and ‘be careful’.

A few hours later, the remaining staff head out to the bars to celebrate avoiding the axe but Sullivan stays behind to take a look at what Dale has left him. He quickly realises the reason for Dale's warning. So many of the firm’s assets are now toxic that, according to Dale’s projections, they will soon owe a lot more than the company is worth. He calls his boss Will Emerson (Paul Bettany) back from the bar.

The film ‘simplifies’ the crisis in to a single overnight session as the situation is escalated up the corporate ladder and we are introduced, one rung at a time, to the hierarchy. First, sort of nice guy, Sam Rogers (Kevin Spacey), then top risk officer Sarah Robertson (Demi Moore) and the unlikable Jared Cohen (Simon Baker). Dale meanwhile has gone AWOL, which is entirely their own fault for letting him go of course. 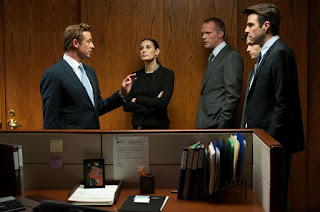 It all culminates when the CEO John Tuld (Jeremy Irons) arrives by helicopter. Tuld, like his managers below him, doesn't understand the figures presented to him and needs someone to explain them to him, as he puts it, as if he were a Golden Retriever but they didn't really. I think I could have done a better job and I do later, to L in the bar over a beer that she didn't previously think she needed. 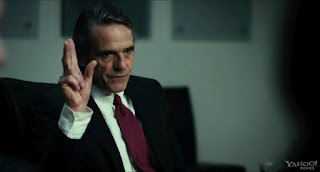 Tuld’s only focus is keeping the firm alive, at any cost. Although for others it poses a moral dilemma of sorts but still self-preservation comes first. It’s nothing personal, just business. Rogers, for one, seems a genuine guy, but cries more tears for his dying dog and even forgets to call his son who’s also in finance. 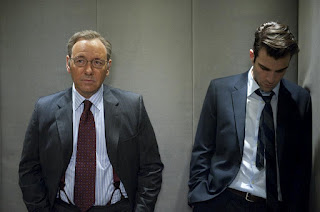 You can't feel sorry for anyone, as they'll all get well paid anyway. When Dale is tracked down, he and Robertson, whose head has been selected to roll for the mistakes, are required to sit in a room all day, doing nothing and getting paid to do so, because they both know too much. Meanwhile their traders attempt to land $1M+ bonuses for offloading the near worthless assets onto their unsuspecting clients before picking up the US equivalent of their P45s.

It’s all done very well, it’s engrossing and at times the tension is immense. The acting is excellent helped by some very good characterisation. We are given time to get to know everybody and understand the golden handcuffs that tie them to their trade. Everyone gets used to spending whatever they earn, however large.

At times the film seems to suggest that some bankers might be human after all... Nah, don’t think so.