A rare outing for the bike today. Damn all this running... and still not getting close enough to the planned 30 miles per week. Bike goes well though and no punctures in either direction.

Down into Nottingham for a gig tonight. It was supposed to be a three band performance tonight but Let’s Wrestle cancelled last night’s London show due to illness and they don't make tonight's either. Their loss is Childhood’s gain who are promoted to main support and a later slot.

They are, I believe, Nottingham based Londoners. It doesn’t start too well for them, the sound is muddy, but it’s soon sorted. At first, I think, typical indie. Could have been anyone. Probably were. Then they get a bit of a jangle going. Hmmm, quite nice. Catchy. Pleasant. Very clever at times. They steadily win me and everyone else over. In the end we're all sad to see them finish.

Play.com are refusing to send me The Twilight Sad’s new album 'No One Can Ever Know'. It only came out last Monday, yet they are saying it is out of stock. How can that be? Amazon already hate me and it seems perhaps now that Play do too. A few months ago, they refused to give me three downloads that I’d ordered. They never did say why, although they did refund me, presumably downloads can’t be ‘out of stock’?

So I’m ‘unrehearsed’ for tonight’s gig at Stealth, which as Nottingham’s ‘musical Mecca for dance fans’ is again an unlikely place to see them. It’s almost as if someone is trying to keep them under the radar.

Learning from past experience I opt to stand well back, in what, I hope, is a more acoustically advantageous position. Beeston. That’s a suburb about three miles outside Nottingham for those that don’t know. The Saddos (may I call them that?) are well known for making an ear reshaping but poetic racket and I may need the use of my eardrums in the next fortnight.

The band take to the smoke encased stage fashionably late and set the tone with the thumping bass and heavy synths of ‘Kill It In The Morning’. Rumour is they’ve gone all Cabaret Voltaire and yes I can see that, with a side dish of industrial phase Depeche Mode perhaps.

The formula is repeated on ‘Don’t Move’, which is almost a pop song. Almost. They’re still loud of course but I think they’ve turned it down a notch or two, or is it just my new position? 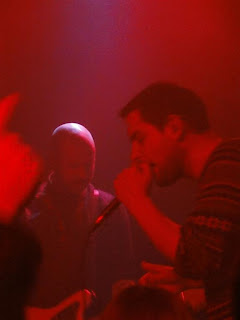 With the musicians in the band frequently disappearing into the fog of smoke it’s difficult not to centre your attention on the fascinating individual that is singer James Graham. He stands there, at the centre of it all, delivering his vocals as passionately as ever, eyes closed, seemingly lost in it all. In fact I don’t think it’s until three songs in that he actually opens his eyes and realises we're there. Hello! At which point he explains they’re from up in Scotland, there’s nothing like keeping it general, and thanks us for coming before he submerges himself back into his own little world. 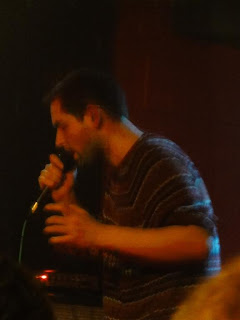 So far the ears are fine but the big test is going to be when they play one of their oldies. Enter ‘That Summer, at Home I Had Become the Invisible Boy’. Which is again glorious but have they toned it down? A little. Enough. Tonight, amidst perhaps a more considered approach, Graham’s voice soars above absolutely everything that the rest of the band can throw at him and you can hear practically every word of the song. The band’s trademark guitar feedback is still there but it seems to occur increasingly at the end of songs and less in the middle. 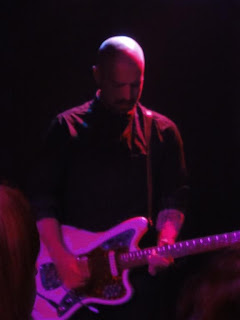 Then it’s back to the new album, from which they play all but two. Among which there’s the faster pace of ‘Dead City’ and the almost soulful ‘Alphabet’. Sandwiched in between is ‘Reflection of the Television’, which is just so massive tonight. All the old ones, maybe just because they are more familiar, are absolutely epic. The cheery ‘I Became a Prostitute’ is intense. Graham makes it so emotional but then he could probably make having a cup of tea seem emotional.

There’s recent single ‘Sick’ which I haven’t quite got to grips with yet but then there’s also ‘Cold Days From The Birdhouse’, which eases its way in gently and then explodes, taking Stealth with it.

As we head towards the end of a mesmerising hour long set, Graham once more opens his eyes and thanks us again for coming before the band wind the guitars up again for ‘And She Would Darken the Memory’ and finally ‘At The Burnside’. An oldie that I’ve not heard them play before.

With a final fading squall of guitar noise it’s all over. Absolutely brilliant and as a bonus, the ears are fine, still attached. The band may continue to fall under the radar but they don’t seem too bothered, me neither, let’s keep it to ourselves shall we.
Posted by FitForNothing at Wednesday, February 15, 2012