Someone has stuck a sticking plaster on our internet connection and email is now beginning to trickle through. Still think something needs a kick though, either the equipment or a person at our internet provider.

I'm afraid I have to grass L up and say she’s been cheating at her box ticking. The swimming pool is shorter at Lenton, where she’s been doing her lengths this morning. Sneaky.

Online entry for the Barrathon has been rearranged for tonight at 7.30, when we’ll be in transit to Coventry. Damn. I'll just have to try and do it on my phone. It worked for L’s Sleaford entry last year when we were in Glencoe.

Everything actually goes swimmingly, we’re parked up in Coventry at 7:32 with full 3G reception and our entry goes through without a hitch. Never thought that would happen. I had visions of us having to wait until we got home and then finding the race is full. Then we head off to rendezvous with Son and his gf at the Kasbah.

We walk in to what is a very crowded Kasbah and squeeze ourselves up against the bar. The support band are already playing. They’re called fiN, yes that’s ‘fiN’ with some eccentric reverse capitalisation, a lowercase ‘f’ and a capital ‘N’, presumably to distinguish themselves from early 90's band Fin, not that it makes a jot of difference to google.

As they play away we barter with the girl on the bar to find exactly what’s actually available tonight, beer - nope, San Miguel - ran out, wine - nope, shall we just have Tuborg then.

You sort of get the impression that fiN don’t get to play to such big crowds very often but tonight’s 1000 capacity sold out Kasbah doesn’t faze them and the four piece from deepest Surrey throw themselves wholeheartedly into the experience.

On first listen, perhaps just another generic indie band with arena sized ambitions but they succeed by mostly keeping it simple and not adding in keyboards and the like. Coming over as a cross between a roughed up White Lies and a smoothed out Nirvana exhibiting some nice heavy moments blended with some decent choruses, not unlike Feeder in fact.

Tonight is the third date on Feeder's four night stint previewing their new album 'Generation Freakshow' which is due in April and there's quite a buzz around the place tonight. We’re still buzzing away when Grant Nicholas wanders almost unnoticed on to the stage and strikes up acoustic style, assisted only by a little keyboard accompaniment from Dean Deavall, hidden stage left behind a speaker stack. Which is where he stays all night, the guy really should be given a proper stage presence one day, maybe.

I'm not too sure of the merits of opening with a solo acoustic number, it’s a very low key way to start and a lot of people simply continued with their conversations, the philistines, but 'Children of the Sun' is certainly a simple, yet enthralling number. 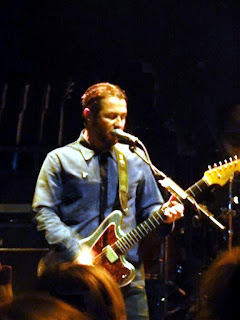 Then the rest of the band join the party and we're into 'Oh My'. Damon has a shirt on! Blimey. I didn’t recognise him dressed. He’s also looking particularly hairy behind his drums. Grant has had his locks shorn but seems to have donated them to Damon. Then there’s Taka, just being Taka, almost expressionless, powering away on that bass with, just for the record, plenty of hair. 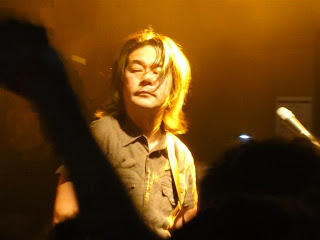 Tonight, it’s all about their new album, album number eight, from which they preview no less than eight tracks. Grant always seem to enjoy himself the most when he's got new music to push, as he’s nearly always evangelical about it, and it’s always good when a band has to work that bit harder for an audiences approval with material the crowd are not familiar with.

The word was that this album would be more commercial, lighter than the previous ‘Renegades’ album but there’s little evidence of that with ‘Tiny Minds’. It’s as heavy as anything on that record.

The best news tonight is that the 'Renegades' album hasn't been forgotten unlike, err what's it called... 'Silent Cry' although the track 'Renegades', undoubtedly the best thing they've done for years, is probably undroppable from the set. However it’s ‘This Town’ that is the first track to get the place really rocking tonight accompanied, as it is, by Damon attempting to punch holes in his drum kit with his sticks. 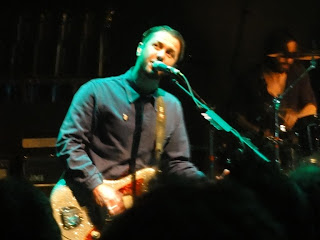 'Hey Johnny' would also have sat well on the 'Renegades' album but work on that ending boys, it just peters out catching everyone by surprise and quelling the applause. We did like it, honest. We just didn’t know it had finished. Another new number 'Sunrise', a song about the trials and tribulations of city life, is more mellow and jangling, more ‘Comfort-able and Sound’.

All the new stuff is good, very good but what else did we expect. There's no sign of any dissent to the absence of a few set regulars tonight or to the number of new tracks played. The reception is good for each and every one.

The new single 'Borders', which was previewed some time ago now during the ‘Renegades’ tour, has been everywhere recently and on mid week sales this week was sitting inside the Top 40. This is perhaps why so many people seem to know the words tonight about the border running, asylum seeking or just running away from something Jessie. I hope she made it to the Lakes.

Grant wonders if anyone wants to hear the ‘Lucozade' song? On go on then. The beer explodes in the air for ‘Buck Rogers’, as covered by the 'The James Cleaver Quintet' whilst rolling down a hill.

The best is saved to last though and the finale is impressive. 'Idaho' was apparently written about touring ‘Polythene’ in the States or something. It certainly has the right sound for the era, it sounded like it was off ‘Polythene’ itself. It’s a particular highlight. It would have been cool to have followed it with something actually off that record but a no holds barred ‘Insomnia’ was a good substitute, although it sounded a bit like Grant was playing it with the wrong guitar? Or was it just my imagination that it sound like it was in a different key. 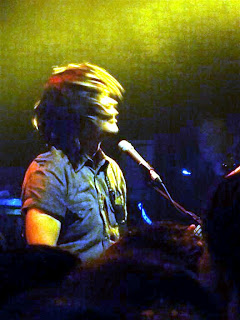 Better still though, was the fantastically heavy title track of the new album 'Generation Freakshow', a song about the student riots and itself bristling with attitude despite being written in Banbury... Promising stuff indeed but when Grant shouts 'Let’s go'... is he trying to start a riot? You can end up in court for even thinking that these days but what a fantastic track and that’s where they close the set, at around the hour mark, which is a little on the short side guys.

Then they return to play two more songs and to end the evening on a 'High', literally. Well not end exactly, that’s 'Just A Day's job obviously and it brings yet another brilliant Feeder gig to a close. With as usual the band leaving you feeling sated but still just craving that little bit more.

We get home and find that Barrathon is full. So it's a good job we didn't leave it until later, it filled up in only 36 minutes BUT we’re in it. Wow.