I slither to the bus.

I’ve noticed a few gigs being advertised at the Ballroom in Birmingham. Where? In Dale End? It's the old Hummingbird. I thought they were supposed to be knocking that down? But apparently it reopened late last year. Their website says they are three rooms: - The Ballroom, The Other Room and The End. Awful names all three of them. The 'Ballroom' may sound very retro but... the Hummingbird, there's a name. 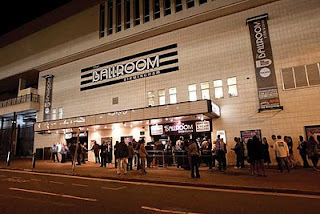 We have a bit of a problem with stray teenagers on Pride Park, lots of them wandering aimlessly down the centre of the road. We are near a sixth form college. They always expect the traffic to stop for them, which it does, grudgingly. The flaw in this laidback approach of theirs is what happens when they step out in front of a car with a teenager at the wheel, with the same view on life, who will obviously expect them to get out of his way. Happened today. Very funny.

I win a game at squash. Box ticked.