It’s All Downhill From Here

The Weston 5 is not really my sort of run. It’s too short (5 miles), is mainly on pavements (which I don’t like the undulating nature of), has the first section on a potholed track and the last on grass. L isn’t taking it very seriously either, misdemeanours last night with alcohol and this morning without. So she’ll probably post another season’s best.

This race counts as part of the championship for the club I’m in and I had contemplated giving that whole series a go this year until I saw the other races in the series, most of which didn’t appeal. Plus there’s one other teensy eensy blip in the plan, that I’d have to wear a club vest and rather unpatriotically I haven’t got myself one yet.

L offers me hers, suggesting we cross dress for the day but I decline. As I’ve said I don’t fancy the other races in the championship. I don’t fancy this one much either but it’s local and it ticks boxes. Training for me, mileage for L.

There’s another reason I don’t fancy it much, I’m still sort of ill. Yet needs must. I have to do some running at some point or else I’m sure my body will implode. So it’s a case of gently does it. Unfortunately these races are so damn fast and it’s difficult to do gentle.

At least it’s generally flat. So there’s no need really for a female marshal to throw in at half way a ‘it’s all downhill from here’ unless she was being metaphorical, but I assume she's simply lying, as all marshals do regularly. Well all male marshals do. The female ones are usually more honest or at least have the honesty to look dishonest when they’re lying. This one at least looks sincere. The thing is I lived here for 18 years, so I know that’s it’s a steady uphill all the way back to the finish line.

I’m slow as expected but box ticked. L does relatively better although she doesn’t do the season’s best I predicted but still, box ticked.

Time for Sunday lunch at the New Inn in Shardlow me thinks. They do the excellent Derby Brewery beers there as well. 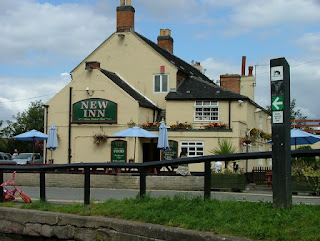 New Inn - Shardlow (J147) / CC BY-SA 2.0
Then there’s a bit of a panic as Daughter has to change trains on her way back to Sheffield from Loughborough via Edinburgh. Well hopefully not via Edinburgh, dependent on her not nodding off as the train passes through Sheffield station on its way to Scotland. Joyful texts of success are received just as we take out seats in the cinema.

We have put this off and put this off because it's George and well, it can't possibly be any good, can it? Eventually we cracked. It's been nominated you know and so has George.

The Descendants is theoretically a film about a land deal because Matt King (George Clooney), a workaholic lawyer in Hawaii, is the sole trustee of a plot of land that has been in his family for ages. He and his cousins have to decide who to sell the untouched land to before the trust becomes dissolved in seven years time or they could of course do the unspeakable and leave it unspoilt. 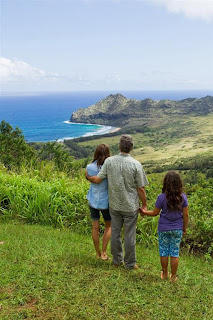 You can probably guess how that turns out but it’s all a bit incidental really, the deal is just a side show in the film. The main plot centres around King’s thrill seeking wife (because he is so dull) who suffers a serious head injury in a powerboat accident. Now King not only has to deal with a wife in a coma but he’ll have to try to communicate with his daughters as well. Scary.

His youngest, Scottie (Amara Miller), has started to go off the rails and is acting up at school whilst Alexandra (Shailene Woodley) has been off them for some time, moving on to drugs and alcohol. King hops on a plane to bring her back from her boarding school, which is on a different island. Unfortunately, the best bit of the film, where he gets his drunken rambunctious eldest daughter on to the plane and then all the way home is cruelly edited out. All we see is him carrying her up the stairs to her bedroom. Cop out. That could have been good.

Then oddly from struggling as the self-confessed ‘backup parent’ remarkably, twenty minutes or so later, the entire family are getting along like a house on fire. 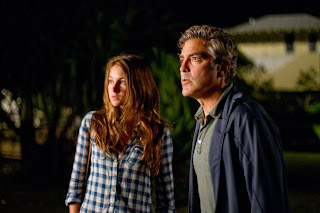 There are plenty of unbelievable moments like that but also some good bits too. There’s a strong scene where he has to tell Alexandra that her mother isn’t going to make it and according to her living will, they will have to take her off life support. Then Alexandra drops her own bombshell; that her mother was having an affair.

Faced with this knowledge, King does not go off the rails or go off to find the man to punch his lights out, as he would have done in many films. Instead we are asked to believe that yes King would want to track down his wife's lover but only to give the man a chance to say goodbye to his mistress. That may be sweet but it’s also slightly insane. At best, wouldn’t you send him an email? 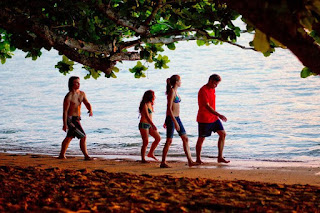 So the whole family, along with Alexandra's annoying friend Sid (Nick Krause) who thinks her Grandma's Alzheimer's is hilarious, embark on one those road trips that America films are so fond of. Sid’s reason for being there is revealed towards the end, when you’re well sick of him, but even that’s an odd moment, where King seems lost for words or just lost and the moment is, well, lost. 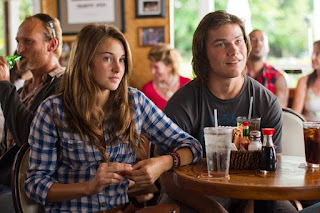 Ultimately nothing really happens. When King finally confronts the man, again it’s all so, well nice. The whole film is like that, so lightweight, inconsequential. It’s another film where I was itching to amend the screenplay. In the end, little of it is really believable. Even his wife's eventual death isn't sad because at no point do we really see her alive nor are we given any indication that she could survive.

I can't help thinking that if someone like Mike Leigh had restaged this in some rundown housing estate in the UK with a bit of ‘kitchen sink realism’ we might have had something.

So is Clooney any good? Is he worthy of his many nominations? Not especially, he’s ok. Clooney does what Clooney does but he's been better.

It’s not a bad film, just nothing to get excited about. It’s got a sort of a RomCom feel to it; only without the Rom or the Com. I ought to say here that my partner loved it but for me... nah.

We fall into the H&H. Certainly need a pint after that.