Still fighting fit but I’ve relapsed a little and that’s official. I didn’t think a gentle game in an overheated squash court would have a detrimental effect. I blame the bump on the head.

My new ‘X-Socks’ have arrived but I’m not getting chance to use them. They are frighteningly complicated for a pair of socks. They come with their own hologrammed unique number and a two year guarantee, although I’m not sure what they’re guaranteed against. Does it mean that if I don’t set some quick times in them, I can send them back? 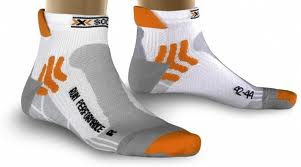 Daughter is ill again and we cough at each other over the phone. There’s been something going around their student house, she says. Probably doing several laps of the house I bet and having a whale of a time.

To be fair, she has been working hard on getting the unhealthiest student of the year award, an award which admittedly is going to be tough to win. There’s an awful lot of competition in that category but she’s been giving it a fair go.

I meet up with a couple of mates for a drink after work. Well only one of them actually, as the other one cries off ill, obviously not fighting fit like me.