Over To You Then Nottingham

You’ve got to hand it to Derby... but not to Nottingham. It looks like Derby’s Velodrome plans are going ahead, with building to start in the summer. It will include a huge gym and sports halls as well. 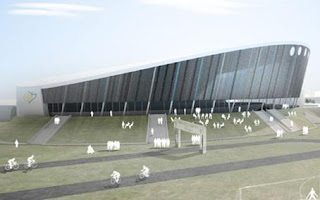 Plus they say they plan to reveal their plans for their Olympic sized swimming pool soon. So then Nottingham, what do you have planned? Apart from cancelling this year’s marathon.

L heads off to Derby for her run. She’s says she’s not in the mood at all. She never is but she’ll do it, the spreadsheet says she must. I pick her up later after a productive dog class. MD had his thinking head on tonight. While Doggo had his boot sitting head on and didn’t get a go. Sorry mate. Next week.