L runs the Sleaford Half Marathon for the third year in a row. I’ve bailed out this time but then I haven’t got a mileage target to hit. At least not yet. It’s the warmest it’s been for a race in Sleaford in living memory, probably ever, but that’s not actually saying much. Despite their being a frost in the car park the temperature is officially above zero, the wind below 30mph and it’s not raining. Yet. 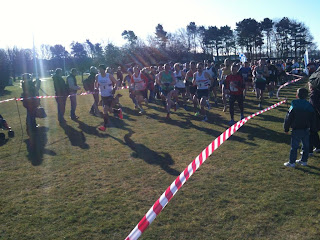 L, has she makes a habit of, hacks several minutes off her best time here in her last ever race here. So see you next year. Maybe.

We head home for the usual post race chill out session, which is so chilled out that we’re well late getting out the house for tonight’s film. Then the bus doesn’t turn up. After a long wait we start to walk and then hop on the next bus as it catches us up. In the meantime we negotiate, renegotiate and then renegotiate again the film we’re going to see.

We manage to cram in a Broadway meal and then I break my AF fast of two days, as we settle down for the latest Harry Potter.

Something is wrong though. Harry’s ditched the glasses, gone for contacts and grown some stubble. Ah, this must be ‘The Woman in Black’ then, a ghost story from the once great Hammer Films. It is based on a book by Susan Hill from 1983. There is also a popular stage play and a TV movie, made in 1989.

It grabbed my attention immediately when three children leapt unexplained to their deaths from a window in perfect synchronisation. From walking in with not very high expectations, I'm already slightly impressed. Nicely morbid does it for me every time.

Arthur Kipps (played by Harry), who lost his wife (Sophie Stuckey) during childbirth, works for a law firm. His firm, not very impressed with his recent efforts, ask him to travel to the remote village of Crythin Gifford (wasn't that one of the houses at Hogwarts... perhaps not) to find out if the recently deceased Mrs Drablow has left any unknown wills. His employer warns him that it's his last chance to prove his worth to the company.

When he gets there, after a long trip north, there's suddenly no room at the Inn, despite booking, and there’s also something not quite right about the whole village, whose residents clearly don't want him around. It could be connected to the mysterious deaths of a lot of children and the sightings of a woman in black. 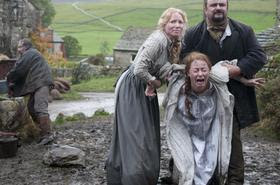 That is, apart from one man, Simon Daily (Ciaran Hinds), a man with a car, a rare thing at the turn of the last century. He too has lost a child, his son, and his wife (Janet McTeer) has gone slightly crazy. She also has two dogs, how more crazy can you get?

The late Mrs Drablow lived at Eel Marsh House, which is your standard horror film rundown mansion, which lies at the end of long winding road that is impassable when the tide is in. Like Lindisfarne or Amityville on sea. I'm not sure how long the woman has been dead but the house is already very dilapidated but then the process of law can be pretty slow or perhaps she just wasn’t into cleaning. 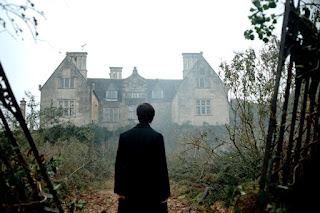 Now what we get is a good old fashioned haunting as Kipps looks through a mound of the old lady’s paper while bumps, bangs and creaking floorboards happen around him. Kipps copes admirably. He possesses an uncanny stupidity/bravery in the face of it all but then I guess when you’ve seen off one shady figure you can see off them all and the Lady in Black is no Lord Voldemort. 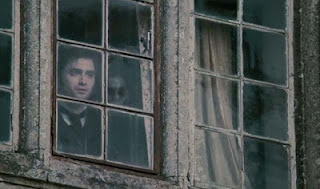 She is though a wronged woman on a mission and we all know to steer well clear of those. They cannot be appeased. Kipps discovers the back story, how she lost her child and it appears now that she’s determined that everyone else will lose theirs too. The bad news for Kipps is that his own son is coming up to visit in a few days time.

I rather enjoyed this. Whereas most modern horror films just pile in loads of blood and gore, this is a real throwback, old school horror, with plenty of scenes that keep you on the edge of your seat. It's just you, a creepy old house and Mr Radcliffe. Oh and the dog. I was worried about the dog. 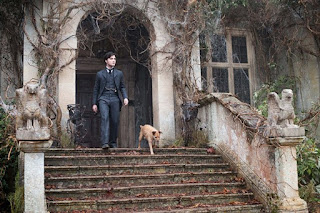 It's even sort of scary. You see them coming but the scares are still quite effective. They probably overdid it a bit at times and stuff like murky liquid leaking from a faucet has never been scary but overall, I loved it.

Plus Daniel Radcliffe is actually rather good. They handled brilliantly and didn’t ask him to do anything he couldn’t. Just stand there and look moody, which he did well.

So does it all end happily ever after? We'll I'm not saying but I left the cinema with a spring in my step but then I do love a good death.

Afterwards we pop into the H&H for a slowie and then head home. Where I try to watch all the cycling before dawn. Vicky Pendleton hasn't had a good weekend and she's been saying this week that she's been having nightmares about being chased by a monster called 'Olympics'. She needs to send for Harry.