Today the 2nd year of the ‘Rauceby Ripper’ from good old Sleaford Town Runners. Famous for the Sleaford Half Marathon with its muddy mile in the middle and home of the coldest place on earth (whenever we go). I tell L to go for it, I’ll hold her coat. She reckons I’ve done 259.6 miles whilst she’s been clocking up over 370 on her challenge. I’m impressed. Time for a day off I think.

Rather appropriately, with it being Sleaford, we get there and there’s a dusting of snow on the ground, yet there isn't anywhere else for miles.

It’s a 8½ mile, approximately (I love that word) multi-terrain course, which is another reason why I’m holding the coats and the dogs. 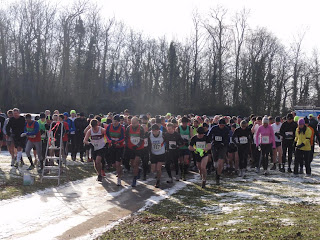 It starts within the grounds of Rauceby Hall, although I’m damned if I can see the hall before looping around the villages of North and South Rauceby. We managed to watch the runners at a point a few miles in, bark at a few horses and upset a few locals. All in a day’s work.

We miss L at the second possible viewing point either because she’s too fast or we collectively spend too much time sniffing, scratching, taking toilet breaks, as well as continuing to bark at horses and upset locals. 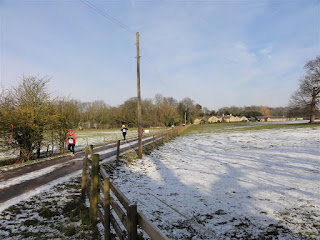 Then it’s off to greet all the runners (and walkers as well) at the finish near South Rauceby Village Hall. L, of course, loved it and got the golden boot. 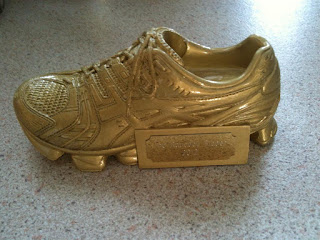 Tonight we had pencilled in a trip to pub crawl Sheffield but the doom and gloom on the weather forecast looks like it’s going to put paid to that. Not that you should ever believe anything on a British weather forecast but unfortunately a threatening weather forecast alone is enough to cause transport chaos with Heathrow cancelling a third of its flights to ‘minimise the disruption to passengers’. Work that one out?

Anyhow if the railways decide to do something similar we’re stuffed, stranded in Sheffield, sleeping on Daughter’s floor amongst the dirty washing and the half eaten kebabs. People have been known to survive down there but never for longer than a few hours, even the rats daren’t risk it.

So we head into Nottingham instead, where it starts to snow... and snow. Excellent stuff and for once they're right. After one in the Borlase we camp out in the Hand & Heart, where it’s ‘Warm Inside’ and watch the carnage ensue outside. 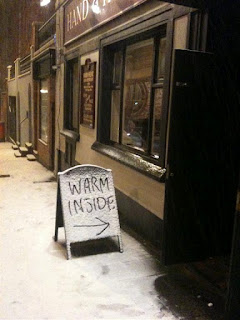 Pretty soon nothing is coming up Derby Road, which is quite a steep road. Coming out of the pub later to walk home we notice the Red Arrow bus slewn across the bottom of the hill, nicely nuzzling a few parked cars. Then like everyone else it's the walk home, as there’s little choice, often down the middle of a very quiet road. 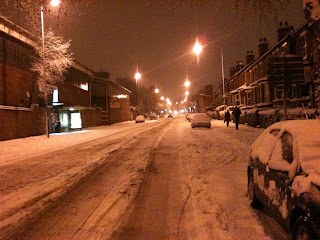