Time For A Psychoanalysis Session

Oddly no plans today. So a chance to laze in bed, a brief park session as its raining and howling a gale, then L suggested completing the Millennium Trilogy during the afternoon, now that is radical.

Then we do an early film, so that we can get back to catch most of the evenings cycling.

We had a quite a few options for films this weekend, so I was going to pick one tonight and then L could pick one for tomorrow. To say I was disappointed with my choice would be a bit of an exaggeration. Yes it had Keira Knightly in it, which is always a flashing amber warning light but it was also directed by David Cronenberg, starred Viggo Mortensen and Michael Fassbender as well as being about Sigmund Freud and Carl Jung. So it sounded good on paper.

Actually Keira, bless her, is far from the worst thing about this movie. In fact she has perhaps found her vocation, playing a mad person who likes a bit of a spanking. I can see it would have been the odd sort of role that awards committees love and she certainly put in the required amount of overacting to be considered, if only it had come in a decent film. Which 'A Dangerous Method' isn't.

It’s nicely shot, well made and reasonably well acted. It’s just a shame about the screenplay. The film is about the professional relationship between Carl Jung (Michael Fassbender) and Sigmund Freud (Viggo Mortensen). Unfortunately too much of the film was taken up by discussions between these two men. These went pretty much how you'd expect discussions between two psychologists to go and you wouldn't really have wanted to sit in on that. Would you? Somehow I expected them to have jazzed it up, showed the back story, developed the characters etc etc. 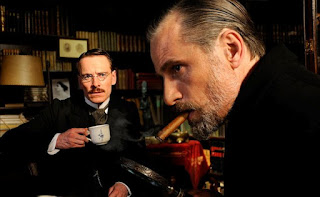 I guess the spankings were there to liven things up but it was all a bit laughable really. Although not laughable enough to count as light relief. I suppose I best explain that there’s a third party in this professional relationship called Sabine Spielrein (Ms Knightly).

An insane Spielrein is sent to Jung’s clinic in Zurich for treatment, where he uses a new form of therapy known as the ‘talking cure’. Basically Jung sits behind his patient whilst they attempt to describe their problems to him. In her case, these turn out to be sexual fantasies generated by her father's ill treatment of her as a child. My diagnosis would have been that she was insecure and in need of attention but then I’m just the viewer here and not the psychologist. 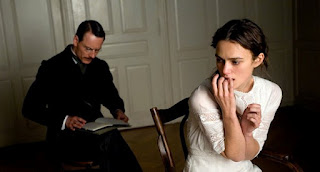 As it turns out, I could have prescribed the same treatment Jung does but doubt I’d have got away with it. He didn’t think he’d get away with it either until a meeting with the maverick psychoanalyst\patient\mad man (delete as applicable) Otto Gross (Vincent Cassel). Gross convinces Jung that there’s only one remedy for her mixed up libido and, by the way mate, monogamy is for wimps.

So Jung gives Spielrein the attention she craves and the spankings via a prescription of regular sex, taken as often as needed, with him. Code of ethics? What’s that?

It does seems to work, Spielrein recovers and turns out to not be as stupid as she looks as she enrols in medical school. Where she becomes... another psychoanalyst. FFS. Meanwhile Jung takes his successful treatment method on to another patient. 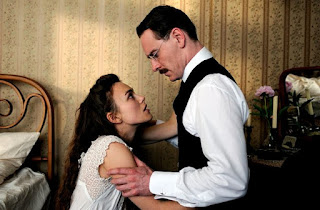 So everyone is happy. Well except Jung’s wife Emma (Sarah Gadon) and even she didn't seem too bothered. Perhaps because, on the evidence provided, it seemed pretty crap sex anyway. In a clever parallel with the film itself, there is little passion or emotion on display. So she probably thought she was better off out of it.

Amidst all this 'excitement' are the insomnia curing discussions between Jung and Freud which involves a lot of reading of letters, which is hardly compelling viewing. Eventually their relationship deteriorates over a clash of ideologies.

Reading my review back it makes the film sound far more interesting than it was. It’s a weird film but sadly not remotely weird enough to be interesting. David Cronenberg made a name for himself with films about dark, controversial topics, so this seemed a perfect fit for him but it’s as tedious as a psychoanalysis session. I guess it was probably educational but only in the way an Open University broadcast would be. You have been warned.