We have an 8.30 flight from Manchester this morning. As it’s a work day and traffic might be bad, we leave early and get there in plenty of time for a hearty (if pricey) breakfast at somewhere called Giraffe. We leave the boy’s breakfasts in the hands of the dog sitter.

Everything at Manchester airport goes swimmingly, no sign of any Heathrow sized queues here and I even booked the multi story next to the terminal, so we can just walk in. For some odd reason it was £10 cheaper than the car park we had last time, from where we had to get a bus. Clearly booking car parks at airports is now as much of a lottery as actually booking the flights already is.

We consider doing hand luggage only but with the prospect of having security taking our toothpaste outside for a controlled explosion, we decide to go with hold baggage instead.

L has a new suitcase, on wheels. This turned out to be a blessing in disguise as practically every pavement in Helsinki was cobbled. It must have been almost like cycling Paris - Roubaix.

Cobbles were actually the least of our problems. All the signs in Helsinki were in two languages - Finnish (obviously) and Swedish. Neither of any use to us. Our map of Helsingfors (to speak a bit of Swedish) seemed to be in a mix of the two, neither of which appeared to be what they put on the front of the trams.

Once we work out that the tram and the Metro are not the same thing, it gets a lot easier. Our hotel is by a Metro stop, as is the central railway station where the airport bus dropped us. Unfortunately it takes us about an hour to work this out but eventually we get to our hotel, a Holiday Inn. Which is just like every other Holiday Inn I’ve stayed in, which is to say it was perfectly fine and comfy. 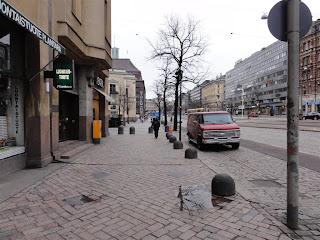 Helsinki itself is less modern than I expected and very eastern European in its look. This is less surprising when you look at its history and discover that for just over a hundred years up to 1917 it was an autonomous part of the USSR and the majority of the buildings put up in that period were modelled on St. Petersburg. Apparently these neoclassical buildings were often used in Cold War era films depicting the Soviet Union because actually filming there wasn’t allowed. Before that it was a part of Sweden for eight centuries, explaining the Swedish signs I guess. 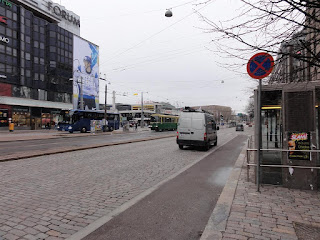 Once we get the hang of it, we discover the travel system is great. It encompasses trams, the Metro, a few ferries and the buses including the one that brought us the 18km from the airport. Everything is covered by an all day travel pass, of which we buy a three day one, not realising that three days in Helsinki is a precise 72 hour period and not as it would be in the UK, three calendar days. So we buy a day too many but never mind.

Actually, I lied, we never do actually get the hang of the travel system, and it constantly throws up something to surprise us.

We do find a very nice bar though, just one stop up the Metro from out hotel. Bruuveri is a Finnish beer house that sells around 15 beers on draught. Regrettably not hand pulled but at least we can avoid fizzy Euro Lager. Some of these beers are from their own brewery but it’s not easy to tell which ones these are. So I try as many as possible but get rather fond of the 7.5% Baltic Porter, which sounds like a local beer to me. Probably fonder than is good for me with a race tomorrow, although with the race start not until 3pm, we have a little hangover leeway if required. 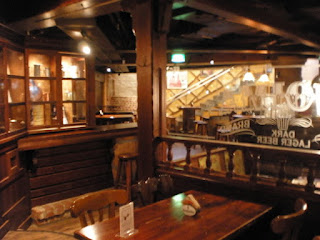 The atmosphere in Bruuveri is quite lively too, due to two large screens showing the World Ice Hockey Championships which are going on simultaneously in Helsinki and Stockholm. Finland are the defending champions. The roar in the pub signifies they have won their first match. Cheers.