L has booked a coach to take her up to Sheffield this morning for 5:20am! The Sheffield Half Marathon starts at 9am and the first train does run until 9.30 on a Sunday. As I have the car, an eye wateringly early coach appears to be the only option. I valiantly get up early to take her to the coach station.

The boys and I briefly return to bed before we get up again, to head to day two of the Nottingham dog show.

Today will be harder than yesterday, it seems hotter and we have the Crufts team event as well. Not that either of the dogs look up to it. Not sure what Doggo’s excuse is, he only had one run yesterday.

Up in Sheffield, people are slipping into their furry teddy bear outfits... they must be mad, in this heat. Poor old MD can’t take his furry outfit off.

The team course is a right stinker and set by one of my trainers. I'll have words later. As I have been in charge of picking our four teams, it is rather pleasing to see our A team come 4th. Which at least means I’ve picked the right team as the A team. Our other three teams don’t do as well but have a ball which was the general idea. MD had lots of faults but as I said it was a tough course, even the winners had 10 faults.

L has done the deed in Sheffield, recorded a good time despite the heat and is now sipping Chardonnay by the fountains. Meanwhile we’re having more weaves problems but it is hot. Too hot for both of us. I return him to the nice cool car to chill for a bit.

It does the trick and on the next run, MD gets his weaves right but has a pole down. Apparently that got us a rosette for 24th. Better than nothing and not bad I suppose out of 250. Doggo is again clear in his vets but again outside the placings. Then we head home via the coach station to collect L.

In the evening I'm down at the Rescue Rooms to see Peter Hook and his band The Light. First though are a band that Hook himself signed to Hacienda Records, Salford’s Humanizer. They combine two musical forces of the Manchester music scene, dance and indie into songs that are complex, ambitious animals. Lots of bass and heavy guitars but at the heart the pulsing technology of a dance beat. It's something that's been done a lot recently but somehow after a slightly indifferent start Humanizer quickly grow on me. Clearly they have something the others don't. Well worth a listen and listen I will.

Peter Hook and the Light take the stage to the Pogues’ ‘Dirty Old Town’. Whether this is a statement of sorts on the mud being flung from both sides after his acrimonious split from New Order, I don’t know but I thought I’d start the rumour anyway.

Post split, Hook decided to revisit the work of their former incarnation, Joy Division, and with his band he’s been playing both of the JD's famous albums 'Unknown Pleasures’ and ‘Closer’ in their entirety, as well as more recently the cobbled together compilation 'Still’.

None of which went down particularly well with those remaining in New Order. In fact Bernard Sumner and Stephen Morris viewed it as something akin to sacrilege. Hook’s actually gone further and been reinventing some of the songs with X Factor’s Rowetta on vocals. For which, Sumner and Morris might have a point.

There’s no Rowetta tonight however, which is fine because I’d rather hear what Hooky himself can do with the material. Tonight its 1979’s 'Unknown Pleasures’, which is fairly obvious from the fact that we have the album cover as both the backdrop behind the drum kit and on Hooky’s t-shirt. Actually it's good to get the first album first although I prefer 'Closer', which will hopefully come to Nottingham another day. 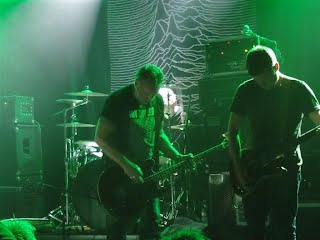 They don’t start with 'Unknown Pleasures’ though. First up is ‘Exercise One’ a track recorded during sessions for the album but not included on it. Then follows ‘No Love Lost’ and ‘Leaders Of Men’ from their debut EP ‘An Ideal for Living’ from 1978, the rest of which surfaces later. Then it’s ‘Glass’ and the splendid ‘Digital’ from their label’s ‘A Factory Sample’ also from back in ’78.

It seems we’re getting almost a chronological history lesson here as they then, five songs in, launch into the full album set.

The crowd are already impressed, have gone pretty much ape for every song so far and continue to do so all night. A factor in this is probably that the majority of the audience tonight, me included, will never have heard the bulk of this material live before. This, I guess, is why we're here and why I think Sumner and Morris are wrong. There never will be a tour by a fully reformed Joy Division because there can't be. I think Hooky understands this. It would be nice if the others were on board but they’re not and tonight it doesn’t seem to matter because what we get is simply terrific. 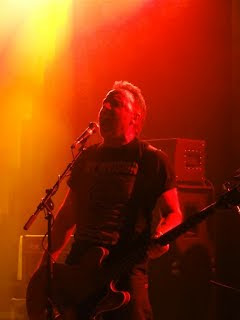 Hook and his band deliver a respectful and faithful reproduction of every Joy Division song they take on, not just recreating them but giving them an awesome power than you simply cannot get just from the records. The Light have a terrific guitarist in Nat Watson, an amazing drummer in Paul Kehoe and then of course there’s Hook’s bass, although he shares bass duties tonight with son Jack, who is no shirk himself. There’s also a keyboardist in Andy Poole and you can’t fault the passion that any of them put into it. Making the songs seem rather fresh and modern, not at all dated.

Vocally, things are different of course. Hook isn’t Ian Curtis and probably doesn’t want to be. Yet his vocals seem to fit the material almost as well. It helps that his singing has improved immeasurably since the days of Revenge and Monaco.

Meanwhile the whole thing is conducted amongst one of the best and most enthusiastic atmospheres I’ve seen at a gig for some time. At times, it's actually quite moving. 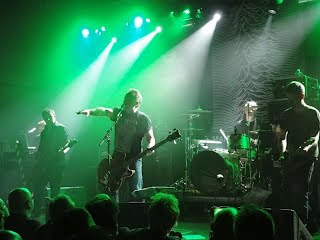 There are so many highlights but the trio of tracks that form the midpoint of the album - ‘New Dawn Fades’, ‘She's Lost Control’ and ‘Shadowplay’ are particularly outstanding. Not just because during ‘She’s Lost Control’ Hook appears to wave at me, even if it does turn out that I'm stood next to his Mrs.

Then after what seems like no time at all, an immensely powerful ‘Interzone’ segues in to the dark ‘I Remember Nothing’, which closes the album and the set. 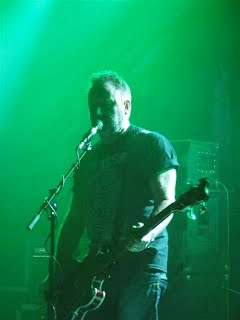 The band return for an encore, some of which is drawn from ‘Closer’. ‘Isolation’ and ‘Twenty Four Hours’ are sandwiched between ‘Dead Souls’ and an amazing performance of ‘Ceremony’ before they leave the stage again.

Is that it? No. The band return a second time to treat us to the rest of ‘An Ideal for Living’ in the shape of ‘Warsaw’ and ‘Failures’ but still they’re not finished as they complete the second of two four track encores.

Which isn’t bad coming from a band, in both Joy Division and New Order forms, that have been notorious in the past for not doing them. I've never seen New Order do an encore. Although I see their current line up are doing them these days and also doing the odd Joy Division track as well. Wasn’t that supposed to be sacrilege? Lol.

As The Light get around to probably Joy Division's most famous numbers ‘Transmission’ and of course ‘Love Will Tear Us Apart’ you almost want to burst in to tears in gratitude. Then when it really is the end, Hooky sheds his t-shirt and throws it triumphantly into the crowd. Job done. Point made.

You could call The Light a tribute band, and maybe we should, but OMG it was some tribute.

I meet L afterwards in the Ropewalk, which is open until 12.30am even on a Sunday but closes early tonight because the students have deserted it at the moment. I guess they're at home revising or writing those final assignments. It’s a shame because the Nutbrook More is rather nice and I only get chance for two, even then I had to promise that the second would be a swift one.