That Is So Not Fair

Apparently there an incredibly cute Schnauzer Shitzoo (or is it Shih Tzu?) cross that has a massive crush on MD. Oh dear. Girls always do go for the wrong guys don’t they? MD though doesn't even bark at her, so perhaps he’s fond of her too.

Both L and I have been asked to do the latest Biobank health survey. Mine came this morning, so they want to know what I ate and drank yesterday. Sunday. L’s came yesterday, so they want to know what she ate and drank on Saturday... howls of ‘that is so not fair!’ from over yonder. I’ll be standing over her as she puts down the several 8%ers in Brew Dog, the Old Peculiar and the curry...

I watch a bit of the Olympic torch relay on the internet, immediately wondering why they’re all doing it in white pyjamas. 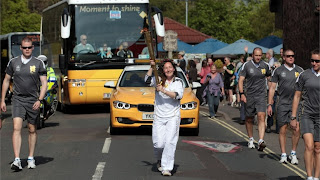 On the way to dog class, our first on a Monday for ages, I chuck L out at a roundabout and she runs to Mickleover plugged into her audiobook, learning about the Japanese vs Dutch trade embargo... she has weird tastes. I’ve started a new Michael Robotham, about the same psychologist my last one was about. I might run to that tomorrow but I think music might make me go a bit quicker.