A Plan Comes To Fruition

Let me tell you about the Heb3 Challenge. Which is to complete at least three of the five Western Isles Half Marathons - Stornoway, Benbecula, Skye, Barra or Harris in any one year. Apparently this is the longest running series of half marathons in Scotland and probably the most ridiculous for someone from the centre of England to attempt. So, here we go.

The first challenge was to get an entry into the hugely popular Barra race, which we managed, despite it selling out in 40 minutes. The second challenge is the 530 miles from Nottingham to Uig on the Isle of Skye, from where we will catch a ferry. Which will have to do twice. We couldn’t make Stornoway which was last week, so will return at the end of June to take in Barra and Harris. We could have done Skye of course but that would have been far too easy.

For all this we will get a t-shirt, complete with the Heb3 logo. We like little things like that. If we could have done all five, and this would have been a near impossibility in travel, cost and holiday allowances they would have overprinted our t-shirts with 'rinn mise na coig' on the back. Which I thought was Gaelic for ‘smart arse’ but apparently just means ‘I did the five’.

As we’re heading up the M6 on route to Scotland we stop off in Stoke to catch the Olympic Torch relay which kicks off from Hanley at 7am this morning in the hands of Tony Pulis, the Stoke City manager.

We drive in along the Cobridge Road to catch it on Waterloo Road and get stopped by the police, who have turned all the traffic lights to red to let the entourage through. Hey presto front row seats. 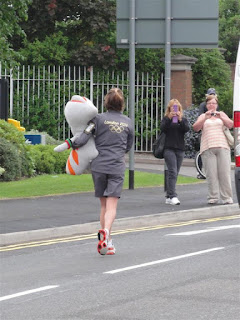 Sadly it’s only the sponsor’s vehicles and once they’ve come through we have to run back to our abandoned car as the lights go green again. Hurriedly we park up somewhere in time to see, rather appropriately, running legend ‘Blind’ Dave Heeley and his dog Seamus handover the flame to another runner, whose name we don't know. 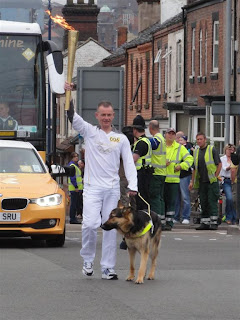 Dave Heeley was the first blind man to run seven marathons in seven days on seven continents and last year he ran 10 marathons in 10 days for Macmillan Cancer Support. 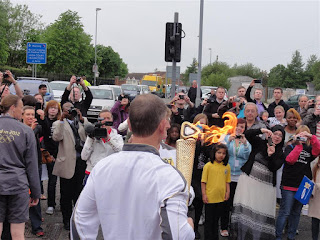 So far, at least our first plan has come to fruition.

Then it’s back to what turns out to be 12 hour drive, if you include the few stops we had, doing one hour stints each. The early part of which is in on-off rain, until we got into Scotland where it quickly started to fine up.

Arriving in Uig we are understandably both starving and gagging for a drink. Up on the hill the Ferry Inn looks the most promising. Looks can be deceptive. We’ve come all this way to find that the local pub does not serve the Isle of Skye ales that are brewed 200 yards away and the only real ale, from Greene King of all places, has come further than we have.

If this wasn’t bad enough, the miserable landlord mutters something about new Scottish licensing laws not permitting food to be served outside on insurance grounds, which sounds like b******** to me, and we can’t take the dogs inside despite the fact that his totally customer free bar is a rather spartan wooden floored affair and therefore very appropriate for dogs. He clearly has no wish for us to buy four rounds of drinks and two two-course meals off him? Estimated cost... upwards of £60... Fair enough.

We depart, as we don’t wish to selfishly put the dogs back in the car that they’ve just spent around 12 hours in just so that we can eat. The Bakur Bar on the pier comes to the rescue. 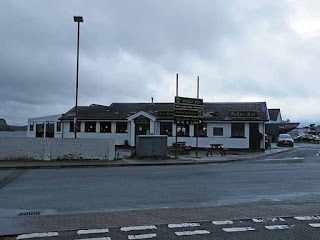 They don’t allow dogs in either but they are more than happy to serve us food, ale from the Isle of Skye brewery and even whiskey, outside.