Overdress In Finland Unless Your Name Is Paavo

First up today, a hugely impressive breakfast at the hotel and I mean hugely. It was huge. We stocked up on it in such style (both days) that we didn’t eat out in a restaurant all weekend, snacking on bar snacks instead in whatever bar we landed in. A nice restaurant would have been nice but pre and post-race hydration was more important here.

Breakfast was served until a remarkably languid 11am but we were out long before then. After yesterday’s public transport debacle (all of our own making), we were expecting another one of similar proportions. So we took no chances, took the Metro to the railway station and then walked the mile up the main street to the Olympic Stadium. Which proved a good way to see the sights. Consequently we were there with hours to spare. 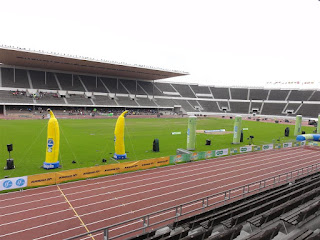 A whole host of sports venues were built in Helsinki for the 1940 Olympic Games, which never happened. Something to do with a World War. Instead Helsinki got to host the games in 1952. As far as I can tell all these venues have been preserved and are still in use today. Work has had to be done on them but care seems to have been taken to keep the original look of the buildings rather than to completely modernise them. In the UK of course we'd have simply demolished them before spending years looking at a derelict site amid political wrangling and escalating costs before we finally built something ‘modern’. 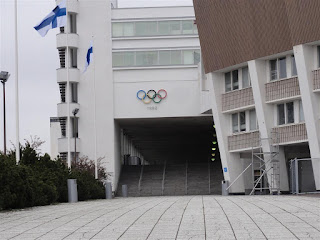 We kill several hours at the race expo, the coffee shop and with a walk around the area, taking in the national football stadium and the Olympic swimming pool which are all part of the same complex. Outside the complex are statutes of Finnish athletes Paavo Nurmi and Lasse Viren. 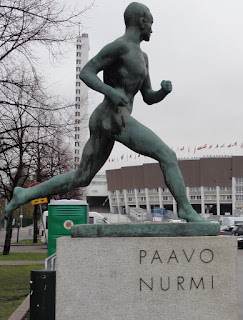 Poor Paavo, like most male statues in Helsinki, he is naked. All the female statutes we see are clothed, which is a bit of a departure from the norm. Lasse kept his kit on though, whether this means he’s less or more revered than Paavo I’m not sure.

The race itself starts at 3pm and I’m in the first ‘white’ group, entered when I had two good legs to run on, whilst L is in the third ‘yellow’ group which starts at 3.20. There are six starts in all, all at ten minutes intervals. 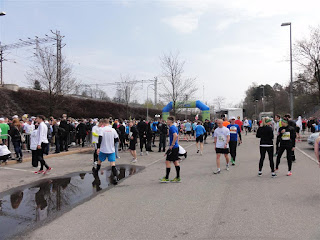 The first thing to say is the locals like to seriously overdress for their running. They are all wearing so many layers. Ok, the day started overcast but it's not particularly cool and now the sun is starting to breakthrough, so it could really warm up later. I’d hate to think what they wear if they go out running in February when the temperature rarely gets above -5. Today the temperature is best described as ‘typically British’.

In the face of all this layering up, L wavers and puts on long sleeves. Probably thinking they know something we don't but I'm sure she’ll regret it later.

The race route takes us around two lakes close to the city centre before heading north, taking in another lake and some parkland. It's run almost totally on cinder paths, which doesn’t suit me and I long for a stretch of tarmac but I don’t get it. The route is also more undulating that you would expect.

As I predicted it's also now quite warm, not that the Fins seem to notice. A few strip off a layer or so but not many, most just sweat it out. Seriously sweat it out. Perhaps it’s some mass communal weight loss strategy.

Local Scandinavian genes kindly produce blondes aplenty, of both sexes, and an abundance of Finnish pony tails, again of both sexes. It's all a bit wasted though without the off-the-shoulder running vests we get in the UK. Buried under all the fleeces, jackets, hats and gloves the effect is lost. I'll just have wile away my time looking at the cultural aspects of Helsinki instead. 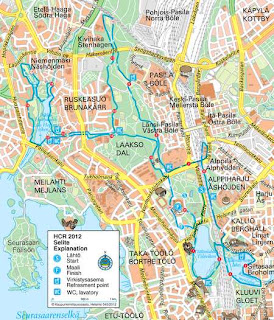 The drinks stops are good with water and Gatorade. Although always in cups, which means I have to stop each time or else I’d have ended up wearing all of it.

The locals are out in reasonable force to watch but I wouldn’t call it ‘support’. They simply stand and stare, either fascinated or appalled, I can’t quite decide which. Very few deign to clap or cheer as people would back home, even in Nottingham, and I assume those that do here must be fellow foreigners. 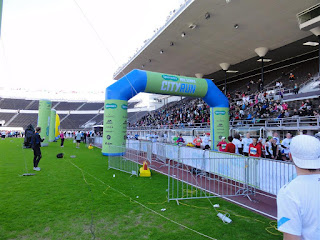 I complete the course in a respectable time of 1:45. I'm pleased with that, beating the 1:48 from my last race at Worcester was my aim. I managed a steady five minute km pace all the way around, which is something to now build on.

With L starting twenty minutes behind me I have plenty of time now to go fetch the dogs out of the car... ah, knew we’d forgot something. Instead there's plenty of freebies to pick up, which will do for lunch. Then I look around for a post-race massage, surely the University of Helsinki’s physio department have their best young talent doing the honours? Or at least a posse of big blond Nordic men who will attempt to snap your leg off. I don't see any, well not until later by which time my legs have already set.

L comes in wearing just her running vest with her long sleeve top knotted around her waist, having had to strip behind a portaloo midrace. What did I say...

Back at the hotel I present L with a special t-shirt I had made to mark the occasion of her completely her 500 mile challenge. 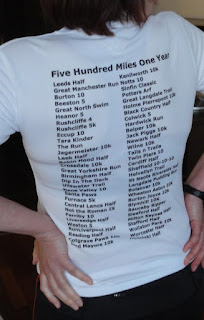 Pub choice tonight depended on the state of my calves. If the news is bad then it’s a few drinks in the Ice Bar (a tourist bar completely made of ice would you believe), where at least I would have the perfect excuse for sitting with my calves on blocks of ice they call tables whilst L arranges to MediVac me home.

As the calves are good, we head to Kaisla instead, This is another beer house that boasts even more beers that Bruuveri did last night. It’s a massive bar with a huge range but one that provides even less information as regards beer styles and strength. So after a few ‘wrong’ choices but some decent bar snacks, we head back to Bruuveri. 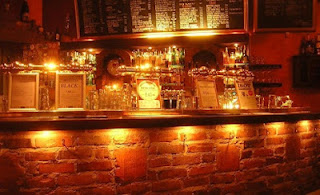 It’s whilst we’re at Bruuveri that we get talking to one of the locals who tells us how reserved all the Finnish people are, apart from him that is and introduces us to the local Finnish firewater at only 6 euros a shot...

When we stagger out later, it is to find that the Metro has shut on us, so we get a taxi back to the hotel. The walk back, although only half a mile or so, could well have been extended by several miles in the wrong direction, if our past navigation failures are anything to go by.