Birmingham City don’t look like a side that lost 4-0 to Leeds last week. They come to us looking well organised and, well, tall. Very tall. They don’t give us much of a sniff and the game finishes 1-1. At least leaving Steve McClaren still unbeaten.

In the evening we visit Nottingham Playhouse to see Richard III. It's one of my favourite of Shakespeare's plays and also one of his best. Sadly it doesn’t seem to get performed as often as it should. So full credit to Nottingham Playhouse for taking advantage (hopefully) of Richard’s recently enhanced ‘media profile’ after the discovery of his remains and putting this production on. 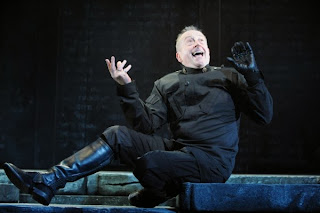 Ian Bartholemew plays the scheming Richard, who murders his way to the throne, and plays him well. Evil b****rd that he is. Bartholemew adds humour to the role with a nice range of facial expressions to the audience, he has very active eyebrows, and a decent humpback. He also forgets his lines a couple of times and has to be prompted, which is a nice humanising touch. I can empathise with him. Despite knowing the story well, I still got lost in the Shakespearean mist a few times myself. 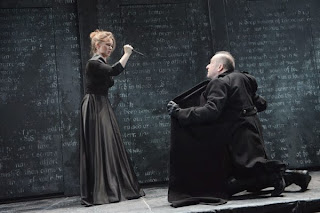 The set layout is interesting, providing a patio of gravestones for the cast to walk upon (or perhaps this signifies a Leicester car park) and full use is made of the auditorium, with the performance extending into both the stalls and up on to the balcony. 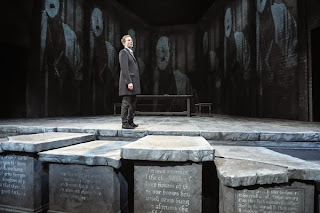 Richard of course dominates the play but the supporting cast are good too. It is staged with a modern, perhaps political, twist which mainly seems to revolve around the cast wearing updated clothing and I’m not sure that worked but it certainly didn’t distract from things. 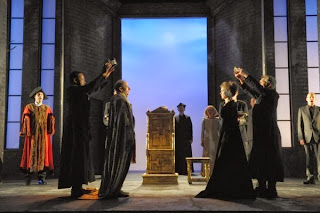 There’s wit too or was it just me who thought that when Hastings's severed head was plonked upon the table it looked just like a bag of dirty washing.

Afterwards we have a few beers in the playhouse bar Cast where they are admirably promoting local breweries such as Magpie and Lincoln Green.