Today the Leicester Half Marathon, in the rain. Yes the conditions aren’t great as we arrive at Victoria Park and park right next to the course for free. I think this happens because they haven’t really published any parking instructions, there are some in the race pack but they’re not much use as I have to pick that up after we’ve parked... I think they need to make better use of their website, which is currently poor.

The race pack goes onto mention the list of banned substances: - mp3 players, roller blades, dogs (sorry boys) and walking in the first four miles (good luck enforcing that one!). 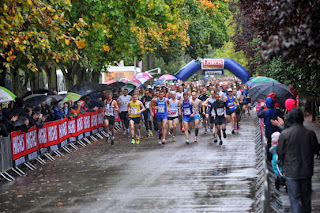 A lot of the organisation isn’t great but one thing they do seem to get right, and it’s probably the most important, is the course, which I love. At Nottingham two weeks ago, the organisation was mostly pretty slick but they seemed to go to great lengths to avoid including Nottingham in the route. Leicester however took the route straight through the city by road, showing off the city centre and then after we’d reached the outskirts we returned through parkland. First Watermead Park, then through Abbey Park and along the canal, all of this was on tarmac paths, no gravel. Then finally back in the city, the last two miles were spent in the pedestrianised centre. An excellent combination of city centre and parkland. Nottingham take note.

The crowds could have been bigger but considering the rain the turnout wasn’t bad. The weather had been so bad that three sections of the route were flooded, including one quite unpleasant section in a subway but there wasn’t much they could have done about that. Although the rain did actually stop for most of the time I was out on the course. 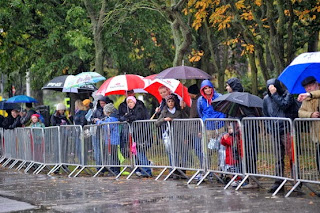 There were other minor annoyances too, that all add up. Drinks in cups is a total no-no for a big race like this, particularly for a full marathon. Good job it wasn’t hot. On the plus side having High 5 drink available was a bonus.

I also missed all but one of the first six mile markers as they along with hundreds of other race related signs were the same sized yellow signs. Next year please, a different colour, bigger and on both sides of the road.

Then there was the timing chip fiasco. The timing chip was stuck in a plastic bag on the back of your race number and the first mile was accompanied by the sound of a cascade of these chips crashing against the pavement as loads fell off. I lost mine, so I picked another one up off the road, so at least they couldn't charge me for losing one. So somebody out there will get a surprise time. Maybe a good time or maybe a bad one, depending on what their expectations were. Other people went back, swimming against the tide, trying to retrieve their own which caused a few issues.

They clearly realised quite soon that there was a problem and they reverted to manual timing. This caused a huge bottle neck at the finish as everyone queued in single file for them to record everyone’s number in the order they finished but the organisers at least deserve credit for trying to recover the situation.

The course was generally flat apart from the last mile which was all uphill. My time of 01:42 was three minutes quicker than Nottingham, indicating that I’m slightly less injured now.

Finally, there was no goodie bag and all the medals and t-shirts say marathon on them, so I can't show off either as I only did the half!

After driving home I drop L at the gym, where she does a session before we head to the new Specialised bike shop in Nottingham where they make some adjustments to L’s new bike for free. She’s been struggling with the reach on the brake callipers and the gears haven’t really been setup right. It is a Specialised but we didn’t buy it from them but through the insurance. They even offer her a free service in six weeks time. That’s good customer service.

In the evening we head over to Stapleford on the bus to the Horse and Jockey where again they have plenty to appeal to my dark side.
(Sunday 13th October)
Posted by FitForNothing at Sunday, October 13, 2013