Back In The Game

The FA Cup 3rd Round is drawn today and Derby draw Chelsea. Bring it on. We can take anybody at the moment.

The burning question, for at least a week, has been, for L at least, when are we going to see Catching Fire? She’s been waiting for me to finish the book, nothing like being under pressure, but I have finished it now. So tonight at Cineworld, we brave the seemingly never ending adverts and go for it.

After their contentious dead heat in the 74th Hunger Games, Katniss (Jennifer Lawrence) and Peeta (Josh Hutcherson) embark on an equally contentious victory tour. This is welcomed like a dose of the plague by the masses in the oppressed districts. That’s not to say The Capitol, their oppressive government, won’t be sending the plague round next week on a tour of its own because that’s the sort of thing they do.

Katniss and Peeta are still pretending to be in love, for the cameras and in the interest of good PR. Things are actually a bit frosty between them and sometimes they even have to pretend that they like each other at all. Peeta’s well into her of course but she’s supposed to be a teenage girl, so he should know he’s not going to get a straight answer. 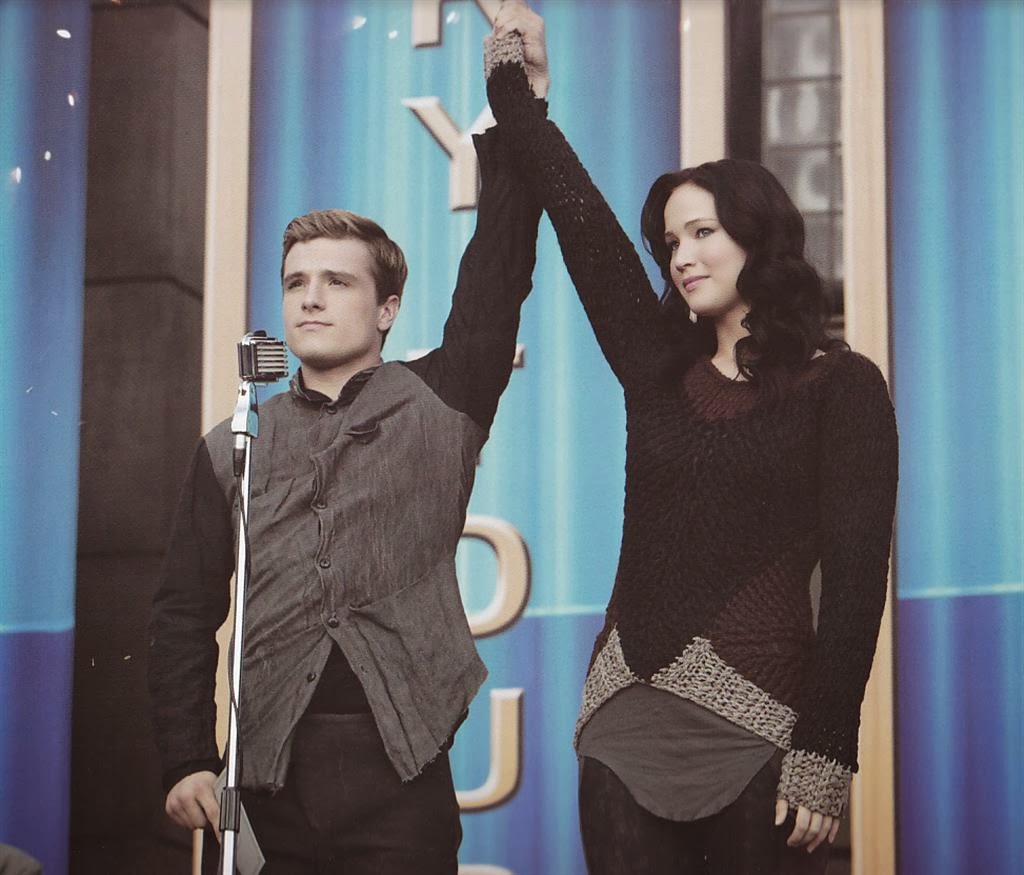 If Peeta thinks Katniss has become a bit of a problem for him, then that’s nothing compared to the problem she’s causing the government. Her victory at the last Games has turned her into a beacon of hope for the districts and many are showing signs of revolt.

Of course when anyone shows any sort of rebellious streak, no matter how small, they are usually beaten to death by the men in white armour but the film quickly cuts away from these barbaric attacks. This is a family rated 12A you know.

Amongst the beatings and floggings, the authorities save a big one for the other corner of our little love triangle of indifference, namely Gale (Liam Hemsworth). 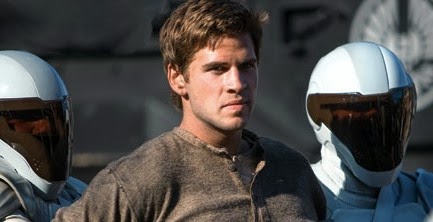 I wonder if Katniss would have been more up for a tumble with him if he hadn't been called Gale? Would Peeta have had more luck himself if he’s simply call himself Pete? So many questions. Although what we really want to see is the two of them slugging it out to the death over the girl. What we get instead is the next instalment of the Hunger Games.

As you will know by now the Hunger Games are basically It’s a Knockout done North Korean style. The next edition, the 75th, promises to be a big one because it’s also something called a Quarter-quell where they can be more evil than usual. This time they choose to force past victors back into the arena, going back on their promise to the winners that they would be exempt for life.

As the only ever female victor from District 12 Katniss gets a bye through the selection process, the lucky girl. Peeta has to fight it out via a drawing of lots with good old Haymitch (Woody Harrelson). Haymitch wins but Peeta pushes him aside, volunteering in his place and so Haymitch again acts as their mentor. Effie is there again too attempting to build team spirit. 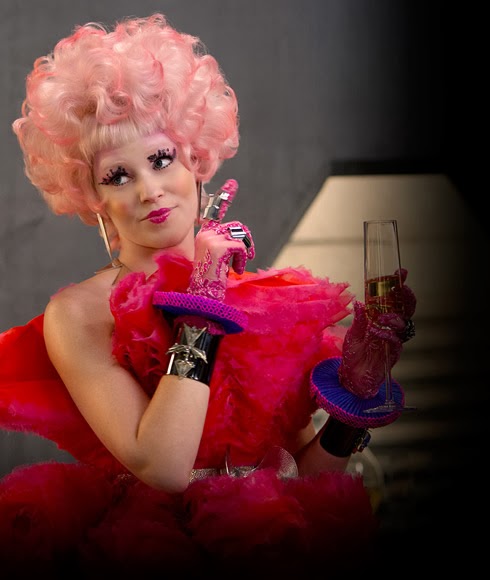 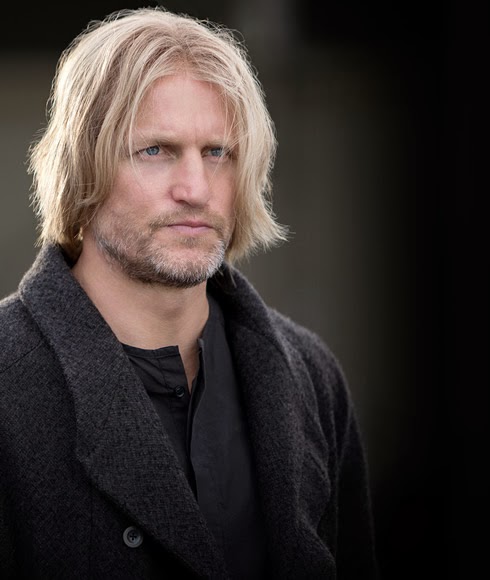 As we meet the other contenders, all past victors, JL gets out sex appealed by a naked, from the back, Johanna Mason (Jena Malone). That’s what an Oscar win does for you, makes you a bit too conservative.

The games start and the Capitol cross their fingers, hoping for anything but a Katniss victory, they’d even take Petta back as long as someone gets rid of that annoying girl.

The players are sent to stand on pedestals in the middle of a lake which itself is surrounded by jungle. What awaits them are tribute eating baboons, tidal waves, poison fog, lightning, and firstly, most terrifying of all... swimming. I’m being serious here, that would have been my worst nightmare, having to dive in and all.

Quickly it becomes apparent that there’s a flaw in the Capitals plan as regards getting rid of our bow and arrow toting Filly because a large chunk of the tributes have been told to work as domestiques, to cull a cycling term, on her behalf. Only no one tells her and I shouldn’t really have told you because it’ll probably spoil the film for you.

So there’s less slaughtering each other than usual and what deaths there are usually happen off screen, come on as I said it’s a 12A, but you do get them having nice friendly coffee mornings whilst working out how to dodge the next tidal wave etc.

Peeta temporarily dies after not looking where he was going and walking into an invisible force field but he is revived by rival tribute Finnick. Which pisses Katniss off no end, saving Peeta was her job. 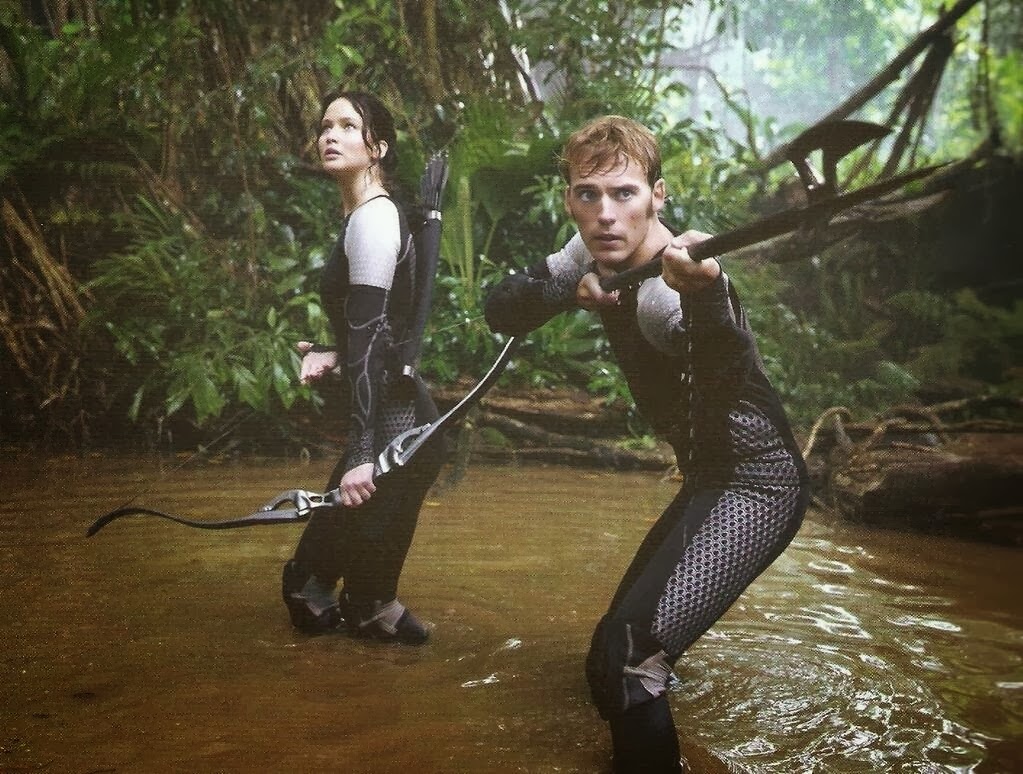 The elderly Mags gallantly sacrifices herself in the toxic fog but we haven’t been told terribly much about her or any of this new batch of tributes, so we aren't troubled too much. We do care slightly more about what happens to Johanna obviously because we have at least seen her bare bottom.

It’s all good 12A slaughtering fun and I enjoyed it but it’s also all a bit of a recycling job, as the plot isn’t very far removed from the first one. So if you liked that, you'll like this. Although unlike the first one it doesn’t really have an ending, it just stops. I wonder if there’s another sequel coming...