I’m back at work today but first I’m at the local Medical Centre for a health check. They wrote to me a few weeks ago implying that now I’m old they’d like to check that I’m still breathing, so I take them up on their offer.

As the nurse sticks a needle in my arm I warn her that I might faint as she draws blood. She just cackles manically and tells me to look away. Somehow I survive that ordeal although now my arm feels completely dead, so it’s a good job I wasn't on the bike.

The rest goes smoothly - height, weight, waist measurement, blood pressure etc and then comes the inquisition. Personally I thought she was a bit harsh on the alcohol units front because she insisted that all pints of beer were 5% alcohol and therefore 3 units each. If only! Clearly not a beer drinker.

She also didn't believe that I did three hours walking a week, on top of the three hours cycling I'd already confessed to, as well as the three hours ‘sport’ e.g. my running / swimming / squash. Three was actually the top box of the five she had, so I couldn’t give her the real figure and she hadn't even got a box for dog training. I did score a big fat zero in the hoovering box though and I was surprised she hadn’t got a sex box, as I thought that was supposed to be good exercise too. Certainly more so than hoovering.

They will send me the results in the post apparently and may call me in for a 'chat' or more tests if deemed necessary e.g. they’ll probably crucify me over the lack of hoovering.

After a morning at work, I then drive to Sainsburys. Big mistake, its total hell on four wheels again. It took nearly an hour to get there and back, and I only went for a sandwich.

Then after work I do a solid half hour of lengths in the pool, despite the numb arm.

Back home we do our usual Friday night in, only with Daughter and L’s brother as guests. I still cook the usual Thai Red Curry but we do scale back the romance. Instead I am subjected to Rock of Ages which as you probably know is a musical rom-com. It actually features some good fun acting performances particularly from Alec Baldwin and Tom Cruise who is superb. 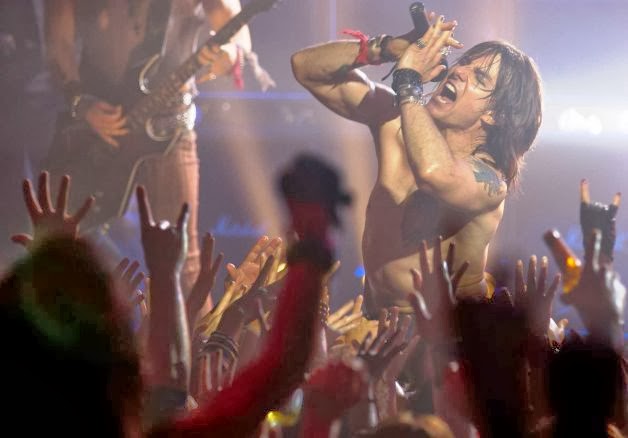 Unfortunately it features the cast covering all those American soft rock power ballads that you had forgotten that you used to sing in the shower during your youth before you knew any better. I think it’s a parody but I’m not absolutely sure.